Facebook posts shared multiple times with purported screenshots from major news networks have claimed that Uganda’s opposition leader Bobi Wine will be sworn in as president ahead of his rival Yoweri Museveni. The claim is false; the screenshots are fabricated and have been passed off as genuine news items. Wine also dismissed the claims.

On April 28, this Facebook post shared three images – one purportedly from Al Jazeera and two from the BBC – presented as screenshots of original broadcasts by the two news channels reporting that Uganda’s opposition leader Bobi Wine would be sworn in as the country’s next president, despite his loss to Yoweri Museveni in January’s general elections.

The captions from the alleged screenshots all contained spelling mistakes, grammatical errors or irregular fonts. 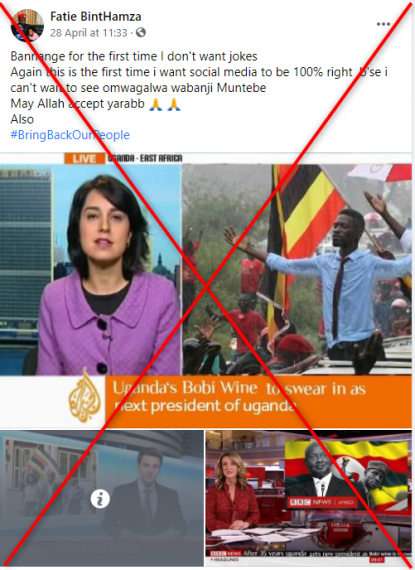 A day earlier, one of the two purported BBC graphics was published on Facebook with a caption that read: “Soon the Elect president of Uganda will be swearing in Bobi Wine By #BBc #WeAreRemovingADictator.”

A screenshot of a false Facebook post with one of the fabricated BBC graphics, taken on May 4, 2021

With Uganda’s presidential inauguration looming on May 12, 2021, some supporters of Wine responded with enthusiastic comments, although some appeared unsure about the news.

The caution is justified: the three screenshots are fabrications and were made to look like original broadcasts.

A reverse image search revealed that the falsified graphics were generated from old and unrelated news reports, even predating Wine’s presidential ambitions.

The original overlay on the Al Jazeera bulletin can be found here, where it was used to report on the UN security council’s vote on Libya's airspace in 2013. 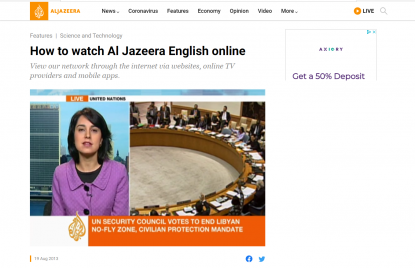 A screenshot of graphics on Al Jazeera’s website, taken on May 4, 2021

Both the headline and the image alongside the news anchor were replaced.

The second graphic, featuring BBC broadcaster Victoria Derbyshire, was poorly edited to add pictures of Museveni and Wine. The headline includes different fonts that are inconsistent with the BBC's usual format.

The original image of the newscast can be found here in a report about China banning BBC World News from broadcasting. In the manipulated version, the reflection on the table still shows the BBC News graphic. If this were a genuine image, there should be a mirror image of Museveni and Wine in front of the Ugandan flag.

Screenshot juxtaposing the hoax BBC graphic (L) with the original one, taken on May 4, 2021

The third graphic featuring a male “BBC” newscaster is frequently used as a template to create memes, as AFP Fact Check explained in this debunk from Nigeria.

Ugandan President Yoweri Museveni, 76, is set to be sworn in for his sixth term on May 12, 2021, after he was declared the winner in controversial January elections. Wine, his main contender, challenged the outcome in court, claiming that the elections were rigged, but he later dropped the legal bid and accused the judiciary of favouring Museveni.

Wine has repeated his calls for Ugandans to “rise up peacefully and unarmed” against Museveni. On social media, the hashtag #Weareremovingadictator has been used to drive the campaign.

In response to the false Facebook posts, Wine told AFP Fact Check he has no intention of performing a parallel ceremony, describing Museveni’s swearing-in as a “sham”.