Social media posts shared thousands of times question the merits of US President Joe Biden’s “$4 trillion jobs plan” by claiming unemployment was the lowest in history a year ago, when Donald Trump was in office. This is inaccurate; the plan is projected to cost at least one-third less -- $2.7 trillion -- than the amount claimed, and joblessness did not reach an all-time low under Trump.

“Why do we need a $4 trillion jobs plan, when a year ago we had the lowest unemployment in history without using taxpayers money?” says an April 23, 2021 Facebook post shared 19,000 times. 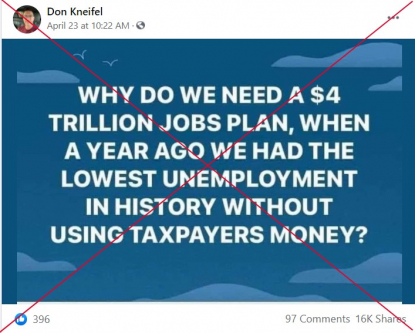 The same post was shared elsewhere on Facebook, and other versions appeared here and here. It was also retweeted more than 2,400 times.

On March 31, 2021 Biden announced the American Jobs Plan, which he called “a once-in-a-generation investment in America.”

It aims to create “millions of good jobs,” and also calls for major upgrades to the nation’s transportation, energy and internet infrastructure, with a dedicated investment of “about $2 trillion.”

Together, the two plans amount to slightly less than $4 trillion, but only one deals directly with job creation. The cumulative amounts may be one explanation for the figure erroneously cited in the social media posts.

To pay for his proposals, Biden, a Democrat, seeks tax reforms, including reversing tax cuts that were a signature accomplishment of the Trump administration.

He wants the top individual tax rate returned to 39.6 percent, and proposes to raise the maximum corporate levy to 28 percent from 21 percent.

Republicans are unhappy about the price tag.

The University of Pennsylvania’s Penn Wharton Budget Model says that the American Jobs Plan proposes new federal spending of $2.7 trillion -- not $4 trillion as the posts claim -- including an additional $400 billion in clean energy tax credits.

Similarly, a blog post from the Committee for a Responsible Federal Budget says the jobs initiative “would cost about $2.65 trillion over the next decade.”

The social media posts are also incorrect in saying that unemployment reached a historic low in 2020.

Screenshot taken May 3, 2021 showing US unemployment data since 1948

By April 2020 -- one year prior to the Facebook post -- unemployment had peaked at 14.8 percent during the pandemic, according to US Bureau of Labor Statistics (BLS) figures. That followed a decline to the lowest level of joblessness since the 1960s -- 3.5 percent -- in January and February 2020, as well as in September 2019, the data show.

That was not, however, the lowest it had fallen in history. A BLS data series beginning in 1948 shows that unemployment dropped to 2.5 percent in May and June 1953.