Skip to main content
US climate envoy John Kerry (L) and US President Joe Biden listen during a virtual climate summit from the East Room of the White House on April 22, 2021, in Washington, DC (AFP / Brendan Smialowski)

Biden not alone when masked during virtual climate summit

Facebook posts claim President Joe Biden wore a mask during the 2021 virtual climate summit despite being alone. This is false; the post features a screenshot of a video call when Biden was alone in the frame, but officials and journalists were present in the room, and leaders from at least six other countries wore masks at other times during the summit. 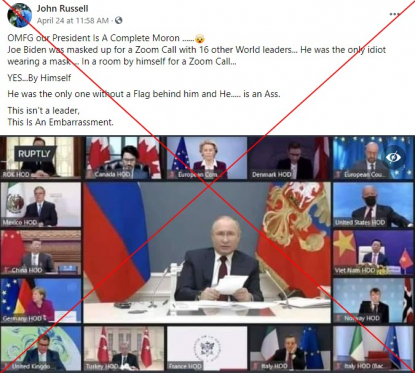 The posts were shared during and after the April 22-23 virtual climate summit organized by Biden that included 40 other world leaders. Together, they vowed to meet or ramp up their goals to reduce emissions and slow global warming.

The logo visible in the top left of the image shows that the screenshot was taken during an April 22 live stream broadcast by Russian media Ruptly.

However, the claim that Biden was alone in the room during the summit is false. US climate envoy John Kerry and US Secretary of State Anthony Blinken also sat at a table with Biden. Screenshot of a C-SPAN video of the virtual climate summit taken on May 4, 2021

Photographers and videographers were also present in the room, wearing masks. 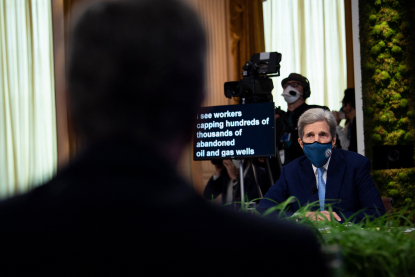 US Secretary of State Antony Blinken and climate envoy John Kerry (R) listen while President Joe Biden speaks during a virtual climate summit from the East Room of the White House on April 22, 2021 in Washington, DC (AFP / Brendan Smialowski)

Asked during an April 26, 2021 press conference why Biden wore a mask at the summit, Press Secretary Jen Psaki explained that “there were additional staff there, additional personnel. And that’s the sort of model that we try to keep ourselves to here.”

On April 23, Secretary of Transportation Pete Buttigieg took part in another session of the summit with Biden and wore a mask as well.

The posts also say that Biden was the only leader who wore a mask during the summit. This is also false. 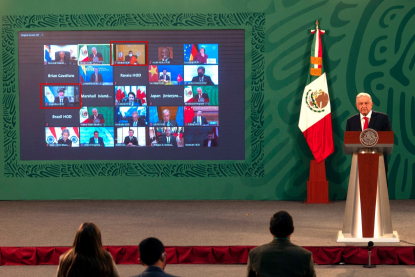 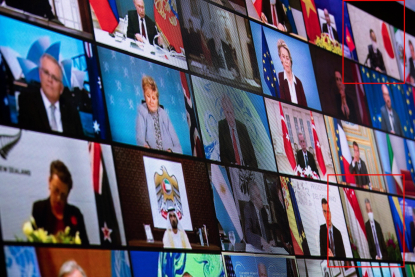 World leaders are seen on a screen during the virtual climate summit from the East Room of the White House on April 22, 2021 in Washington, DC (AFP / Brendan Smialowski)

Other world leaders seen on camera with their masks on included Italy’s Mario Draghi and Poland’s Andrzej Duda.

Biden is regularly attacked for his mask wearing by detractors, led by former president Donald Trump, who did so throughout the 2020 presidential race.