Skip to main content
In this file photo taken on November 09, 2020 a woman wears a facemask as she walks by the Pfizer world headquarters in New York. - An expert committee convened by the US Food and Drug Administration on December 10, 2020, voted heavily in favor of recommending the Pfizer-BioNTech Covid-19 vaccine for emergency use approval. (AFP / Kena Betancur)

A video has been viewed thousands of times in multiple posts on YouTube and Facebook alongside a claim that two people died during trials for Pfizer-BioNTech’s Covid-19 vaccine, according to US government records. The claim is misleading; the US Food and Drug Administration (FDA) document referred to in the posts states that while six participants died during the trials, investigators found none of the deaths were related to the vaccine.

The video was posted here on YouTube on December 8, 2020.

At the video’s 12-second mark, a man says: “Just reporting live on a breaking story that I think needs attention, and that is coming from the Jerusalem Post. We have an article released just a few minutes ago. And basically the title is, ‘FDA announces deaths of 2 Pfizer vaccine trial participants.’”

At the video's 55-second mark, the man presents on screen what appears to be an FDA document before stating: “Basically, two participants under the section in the FDA document, which I will show you here were found to have died as a result of the vaccine intervention.” 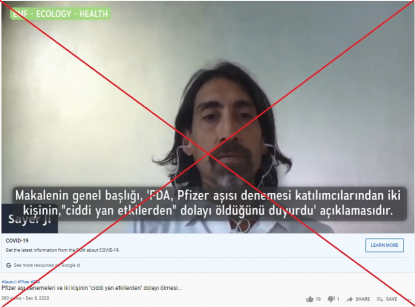 The claim circulated online shortly before the FDA approved emergency use of the Pfizer-BioNTech Covid-19 vaccine, AFP reported.

The misleading video appears to have been taken from this longer YouTube video, which was viewed more than 15,000 times before it was deleted.

The FDA document and The Jerusalem Post article referenced in the misleading video have been misrepresented.

The December 10, 2020 FDA report states that six people -- "2 vaccine, 4 placebo" -- died during trials, but not as a result of receiving the vaccine.

It states, in part: “A total of six (2 vaccine, 4 placebo) of 43,448 enrolled participants (0.01%) died during the reporting period from April 29, 2020 (first participant, first visit) to November 14, 2020 (cutoff date). Both vaccine recipients were >55 years of age; one experienced a cardiac arrest 62 days after vaccination #2 and died 3 days later, and the other died from arteriosclerosis 3 days after vaccination #1.

“All deaths represent events that occur in the general population of the age groups where they occurred, at a similar rate.”

Screenshot of the relevant section of the FDA report mentioned in the misleading posts, taken on December 10, 2020

A longer version of the briefing document, also uploaded here on the FDA website, states: "None of these deaths were assessed by the investigator as related to study intervention."

Screenshot of the relevant section of the longer FDA brief, taken on December 10, 2020

It reads, in part: “(Israel’s Midaat Association) noted that in large trials of tens of thousands of people, death can occur without any connection to the trial, but that companies such as Pfizer are required to report those deaths.

“‘According to the published data, six of the participants in the experiment died, two of whom received the vaccine and four of the control group,’ said Dr. Uri Lerner, the scientific director for Midaat. ‘After an in-depth examination, no connection was found between the experiment and the cause of death.’”