A photo of a train timetable in Sri Lanka featuring English and Chinese text has been shared hundreds of times in multiple Facebook posts alongside a claim that Chinese has replaced local languages such as Sinhala and Tamil in Sri Lanka. The claim is misleading; the schedule shown in the posts was installed by a Sri Lankan hotel for the benefit of Chinese tourists; a spokesperson for the railway station shared with AFP a photo of another schedule at the station that was written in Sinhala.

It shows a train timetable at Mount Lavinia railway station, written in English and Chinese characters.

The post’s Sinhala-language caption translates to English as: “The Mount Lavinia railway station board that has omitted both Sinhala and Tamil”. 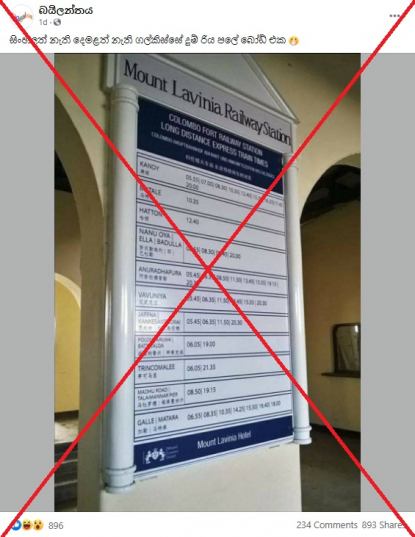 Sri Lanka has two official languages - Sinhala and Tamil. English serves as a “link language”, according to this page on the Sri Lankan government’s website.

The claim however is misleading; the schedule featured in the posts was installed by a Sri lankan hotel for the benefit of tourists. A second schedule in Sinhala was also simultaneously displayed at the station.

"Before the tourism industry came to a standstill due to the pandemic, close to 150-200 Chinese tourists would board the trains from the Mount Lavinia station daily,” he told AFP by phone on December 7, 2020. “This timetable was installed for their convenience as the majority of them were not familiar with the local languages. We have a seperate timetable installed for the locals that feature one local language and English.”

Pushpakuamara shared an image of a second timetable with AFP, written in Sinhala and English for the benefit of locals, as seen below: 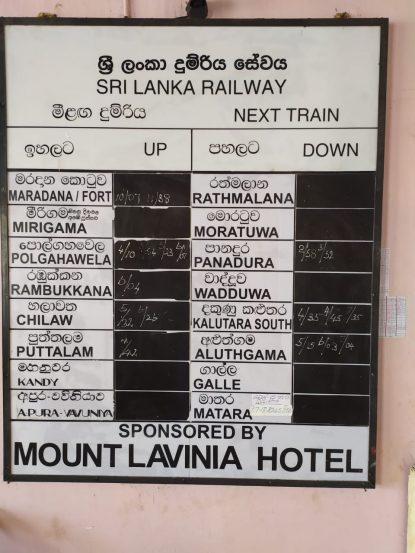 Image of the second timetable written in Sinhala and English for the benefit of locals, shared with AFP by Mount Lavinia Station Master

A spokesperson for Mount Lavinia hotel told AFP by phone on December 8, 2020 that it sponsored the installation of the Chinese and English timetable for the convenience of tourists.