A video has been viewed more than a hundred thousand times on Facebook alongside a claim it shows a prominent rebel group in eastern Myanmar shooting down military aircraft in March 2021. The claim is false: the clip, which has circulated online since April 2020, shows footage from a video game. 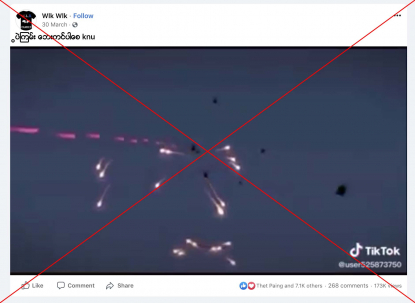 The video appears to show several helicopters exploding mid-air after being hit by artillery fire.

The post's Burmese-language caption translates to English as: “Tough battle. Be safe, KNU!”

“KNU” is the acronym for the Karen National Union, a prominent rebel group in eastern Myanmar.

The post circulated online as the Myanmar military started launching airstrikes against the KNU and other ethnic rebel groups that support the anti-coup protest movement.

The country has been in turmoil since the military ousted civilian leader Aung San Suu Kyi and seized power on February 1, 2021, AFP reported.

Multiple keyword and reverse image searches on Google found the video corresponds to a portion of this longer clip published on YouTube April 30, 2020 -- some nine months before the Myanmar military coup.

The longer clip’s Japanese-language caption states it was taken from a video game called “ARMA 3”.

Below is a screenshot comparison between the video in the misleading posts (L) and the longer YouTube clip (R):

At the end of the longer clip, a Japanese text overlay states: “This video is fiction. The characters, names, events are fictitious and have nothing to do with reality.”

AFP has previously debunked similar posts that misleadingly claimed an ARMA 3 clip showed Iran firing rockets at a US base in Iraq in January 2020.

Bohemia Interactive, the company that developed ARMA 3, told AFP then: "It should be noted that our ARMA games can be modified… by their users and that people can create their own scenarios with the game editor."