Skip to main content
Rockets are launched from Gaza City towards Israel on May 12, 2021 (Photo by MAHMUD HAMS / AFP)

A video has been viewed thousands of times in multiple Facebook posts that claim it shows Indians celebrating the creation of a new base for Palestinian militant group Hamas in the Indian state of Kerala. The claim is false: the footage shows a pro-Palestinian rally in Qatar.

“This is neither Palestine nor Pakistan, but Malappuram in Kerala, where Hamas has opened a new branch,” the Hindi-language caption reads. Malappuram is a district in the southern Indian state of Kerala.

“United Nations and many countries have declared Hamas a terrorist organisation. Israeli secret agency should come to close this branch, #IslamicJihad.” 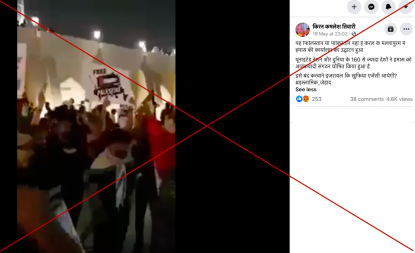 The footage shows crowds waving Palestinian flags and chanting in Malayalam, the dominant language in Kerala.

Clashes between Israel and Hamas escalated in May 2021 after Israeli forces moved in on worshippers at Jerusalem's Al-Aqsa mosque compound. More than 200 Palestinians were killed and thousands made homeless in deadly fighting that ensued, before a ceasefire was called on May 21.

The video has also been shared here and here on Facebook alongside a similar claim.

A reverse image and keyword search on Google found a longer version of the video posted here on Facebook on May 17, 2021.

The video is titled: “Kerala Muslims supporting Palestine took a procession at Grand Mosque of Qatar.”

Below is a screenshot comparison of the video in misleading posts (L) and the earlier Facebook video (R). 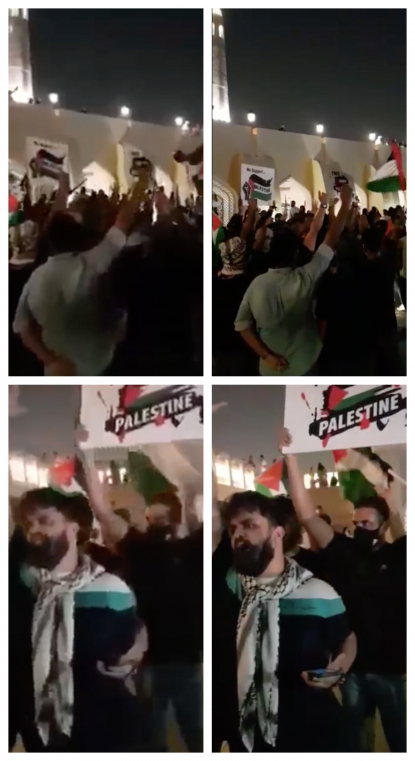 AFP found this video of the same rally posted by Doha-based newspaper Qatar Tribune on May 15, 2021.

The caption reads: “WATCH Dozens of people assemble in front of the Imam Abdul Wahhab Mosque in #Doha waving #Palestine flags to express solidarity with Palestinians in #Gaza, where more than 100 people, including children, were killed in Israeli attacks. #Qatar #Solidarity.”

WATCH
Dozens of people assemble in front of the Imam Abdul Wahhab Mosque in #Doha waving #Palestine flags to express solidarity with Palestinians in #Gaza, where more than 100 people, including children, were killed in Israeli attacks.#Qatar #Solidarity
Courtesy: @hamadlahdan pic.twitter.com/NPBAQ6kaCR

The video in the misleading posts corresponds with images of the Imam Abdul-Wahhab mosque in Doha.

Below is a screenshot of the mosque in the video in a misleading Facebook post (L) and the Imam Abdul-Wahhab mosque on Instant Street View here (R): 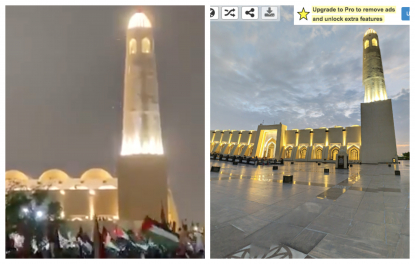 AFP photographer Karim Jaafar also captured images of the protest in Doha on May 15, 2021.

The photo caption reads, “People rally in solidarity with the Palestinians outside Imam Muhammad Abdel-Wahhab Mosque in the Qatari capital Doha on May 15, 2021. Qatar's Foreign Minister hosted the political chief of Palestinian Islamist movement Hamas and called for an end to Israel's bombardment of Gaza, state media said”.

AFP found no media reports that Hamas has opened a new base in Kerala, India as of May 31.