Skip to main content
Former Indian prime pinister and veteran Congress leader Manmohan Singh (R) addresses a press conference while senior party leader Ghulam Nabi Asad looks on at the Karnataka Pradesh Congress Committee office in Bangalore on May 7, 2018. - An election will be held in Karnataka on May 12 for all 224 constituencies of the Karnataka Legislative Assembly, while the announcement of result will take place on May 15. (MANJUNATH KIRAN / AFP)

A video has been shared thousands of times in Facebook and Twitter posts claiming it shows former Indian prime minister Manmohan Singh while he was still in office being “sidelined'' during a photo op. The claim is misleading; the incident happened in 2017, three years after Singh left office, when he and India’s opposition party leader Sonia Gandhi met then-Sri Lankan prime minister Ranil Wickremesinghe.

Gandhi appears to gesture for Singh to move aside, before she continues shaking hands and posing with Wickremesinghe.

The Facebook post’s caption reads,  “Very disappointing video clip.. See how she sidelined the then PM MMS! #Embarrassing. The slave cannot even sit before his master.”

The video has been shared thousands of times in similar posts, including here and here on Facebook; and here on Twitter.

The claim, however, is misleading. The video was taken when Singh was no longer Indian prime minister.

The footage dates back to 2017, when the then-Sri Lankan prime minister met both Singh and Gandhi. 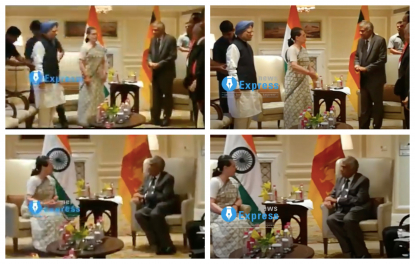 Manmohan Singh’s tenure as a prime minister of India was from 2004 to 2014, when he lost the elections.

Current Prime Minister Narendra Modi has held the office since winning the elections in 2014 and again in 2019.