This video actually shows a simulation exercise in Indonesia, not a real Covid-19 vaccination

A video has been viewed tens of thousands of times after being posted on Facebook, YouTube and TikTok alongside a claim that it shows a man fainting after receiving the Covid-19 vaccine in Indonesia’s West Nusa Tenggara province. The claim is false: the footage actually shows a vaccine simulation exercise in East Nusa Tenggara province; a government official said that the exercise included "a simulation on how to handle a person who suddenly faints".

The post, which claims the footage was recorded in Indonesia’s West Nusa Tenggara province, has been shared more than 500 times.

The post’s Indonesian caption translates to English as: “Happened in West Nusa Tenggara after vaccine injection”. The post circulated days after Indonesia began its mass Covid-19 vaccination drive, which kicked off with President Joko Widodo receiving the first shot on January 13, 2021, as AFP reported here.

The claim in the misleading posts, however, is false.

Keyword searches on Google found a longer version of the footage published on Facebook here by Pos Kupang, a local media outlet, on January 13, 2021.

The post’s caption reads: “The simulation was held at the yard of Sasando Building at the East Nusa Tenggara Governor's Office on Wednesday (13/1) morning. It is planned that 15 officials will receive the first vaccine in the province on Thursday.”

Below is screenshot comparison between the footage in misleading post (L) and the original video (R): 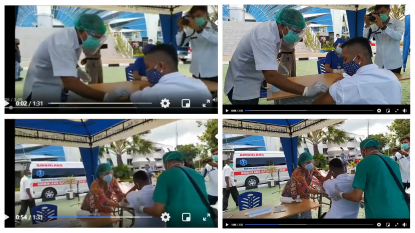 An official from Indonesia’s Ministry of Health confirmed to Tempo.co, a local news outlet, that the man fainted as part of a simulation exercise.

“This is a vaccination simulation. So, it [includes] a simulation on how to handle a person who suddenly faints,” says Siti Nadia Tarmizi, the ministry’s Covid-19 vaccination spokesperson.