Skip to main content
A resident waits for her turn to get tested for the Covid-19 coronavirus in Colombo on December 30, 2020. (AFP / Ishara S. Kodikara)

Multiple Facebook posts claim the World Health Organization (WHO) ranked Sri Lanka fifth in a table of countries' responses to the coronavirus pandemic. The claim is false: the WHO said it had not created any such ranking system.

The false claim was published here on Facebook on April 2, 2020. 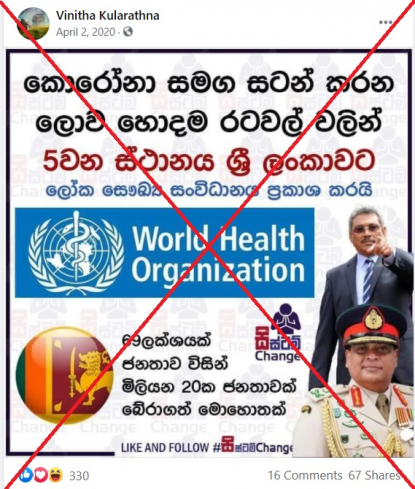 “The WHO declares Sri Lanka’s response to Covid-19 as the world’s fifth best among nations battling the pandemic,” the Sinhala-language text superimposed on the image reads. “A moment when 6.9 million people rescued 20 million people”.

"6.9 million people" is in reference to the number of votes secured by President Rajapaksa in the 2019 election that saw him win a comfortable victory. Twenty million refers to the Sri Lankan population, which presently stands at more than 21,480,000.

The claim has circulated on Facebook since at least March 2020, as seen here and here.

In response to the misleading posts, the WHO said that no ranking or comparison of the pandemic responses by different countries had been carried out.

“WHO does not rank or rate countries for their response to Covid-19,” the WHO’s Sri Lanka division said in a statement by email on January 19, 2021.

There is also no international ranking for countries based on their coronavirus response available on the WHO’s website, as of January 21, 2021.

Sri Lankan officials said on January 18, 2021 the island nation would reopen its borders to foreign tourists after a 10-month hiatus, with travellers subject to strict Covid-19 rules. The announcement came despite a surge in virus cases.