Two images have been shared alongside a claim that they show a doctor in Pakistan offering free treatment to those in need. The photos appear to show a message in Urdu advertising the free services on the back of his car. The images, however, have been altered; the photos in fact show a doctor in Yemen and the original message on the car is in Arabic.

The images were published on January 19, 2021 on a Facebook page called Medical Student Diaries, which has more than 500,000 followers.

The post shows a screenshot of a tweet that shares the images and reads: “A Pakistani doctor from Chichawatni, wrote, ‘sick people can stop car anytime to get free treatment’ on his car. This is my Pakistan.” 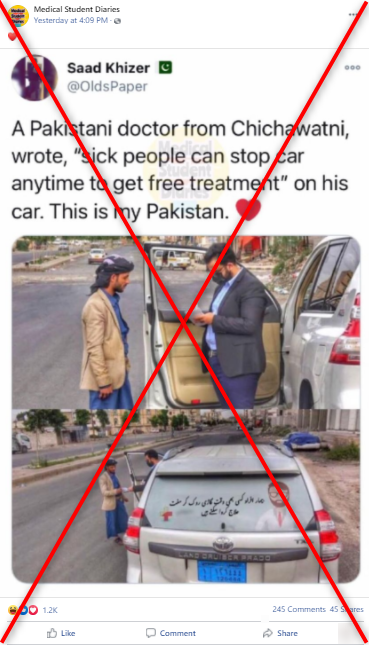 The claim, however, is false and the images have been doctored.

A reverse image search on Google found that the two pictures in fact show a doctor in Yemen and that the original message on the car was in Arabic, not Urdu.

The original photos were published on Arabic news website Al-Watan on June 6, 2020. The article reports that the doctor started offering free mobile medical services to poor and homeless people who did not have access to hospitals.

Below is a screenshots comparison of the Al-Watan report (L) and doctored image shared in the misleading posts (R): 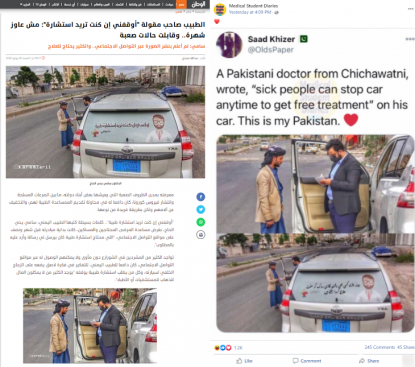 The image of the doctor writing on his notepad was also published alongside accurate reporting by the Arabic version of British newspaper The Independent on June 6, 2020.

AFP reported on the Yemini doctor, Sami Yahya al-Hajj, and his free mobile services on June 8, 2020.

“‘Stop me if you need a medical consultation,’ reads a large sticker on the rear window of Sami Yahya al-Hajj's four-wheel drive, alongside a cartoon figure of the bearded doctor wearing his square spectacles,” AFP reported.

The World Health Organization (WHO) also published a report on the doctor on July 2, 2020, which included other photos of the doctor and the Arabic message on his car.

“As the COVID-19 pandemic emerged in Yemen, Dr Sami received calls and messages from many people on social media worried about the virus and what it meant to them and their families. This made him think of the people working on the streets who don’t have phones or internet and who need medical guidance”, the WHO’s article reads.

“So he decided to start a unique initiative. He printed a poster offering people in the community to stop him for a free consultation if they needed to and placed it at the back of his car”. 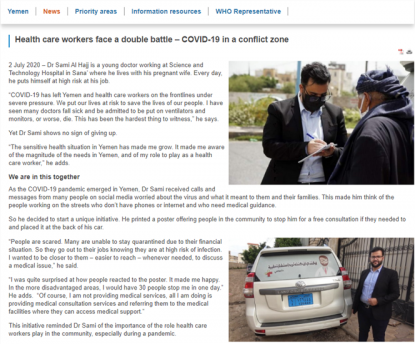