This video shows flooding in Indonesia in 2020, not Malaysia in 2021

A video has been viewed thousands of times in multiple posts on Facebook and YouTube in January 2021 alongside a claim it shows flooding in Cameron Highlands, in the Malaysian state of Pahang. The claim is false; the video actually shows flooding in Indonesia in December 2020.

The video was published here on Facebook on January 6, 2021, where it has been viewed more than 2,100 times.

The two-minute, one-second clip shows muddy floodwaters rushing towards where the video’s filmer is standing. The video’s Malay-language title translates to English as: “Flood Cameron highland”. 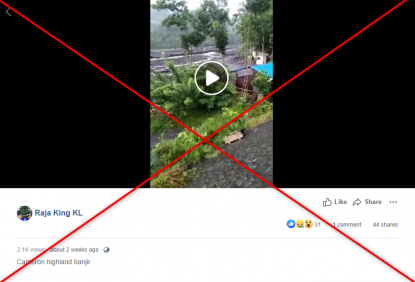 In early January 2021, tens of thousands of people were evacuated in Malaysia after monsoon rains pounded the country's east coast, as reported by AFP here on January 8, 2021.

A reverse image search on Google of the keyframes from the video, using digital verification tool InVID-WeVerify, found this tweet from the official account of Indonesia’s National Disaster Management Agency (BNPB) on December 31, 2020. It shows recognisable scenes featuring the blue tarpaulin from the misleading video.

The Indonesian-language tweet translates to English as: “Rain lava floods occurred in the groove of the river watershed that originated from the peak of Mount Semeru in Lumajang Regency, East Java Province, on Wednesday (30/12).”

This Facebook post on December 31, 2020, uploads the same video with the genuine context of the incident in its caption. It translates to English as: “Cold lava flood mount Semeru”. 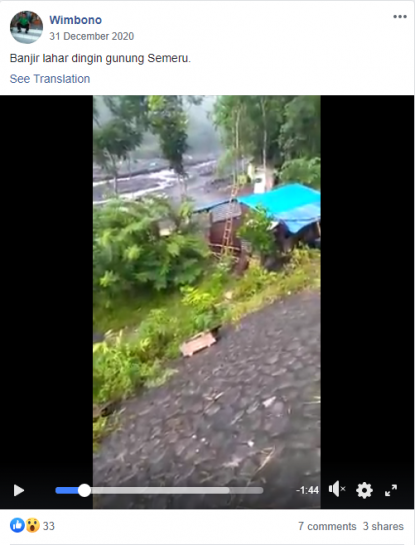 Ash spewed from Mount Semeru, in Indonesia’s East Java province, on December 1, 2020, as reported by AFP here. It erupted again on January 16, 2021, as reported by the BBC here. 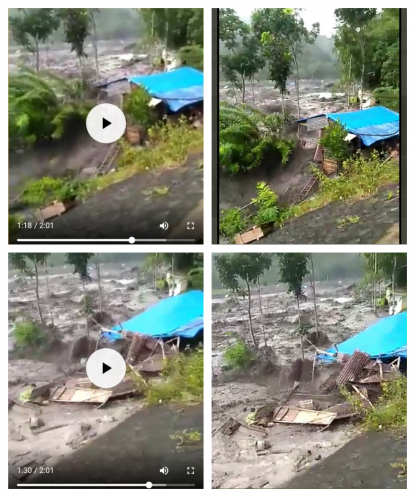 In response to the misleading posts, Cameron Highlands police chief DSP Ashari Abu Samah said the video was not filmed in Malaysia, as quoted by Malaysian state-run news agency Bernama on January 8, 2021, here.