A photo has been circulating on Facebook, Twitter and Reddit alongside claims it shows Italian President Sergio Mattarella being arrested by US forces. The claim is false; the photo actually shows former US ambassador to India Kenneth Juster with a security detail for the US secretary of the state in October 2020. Mattarella has not been arrested.

The claim and photo were published on Twitter here on January 11, 2021.

The tweet includes a photo of former US secretary of state Mike Pomeo stood near a man wearing a black mask circled in red. Other photos in the tweet show a magnified version of this picture, as well as photos of Italian President Sergio Mattarella. 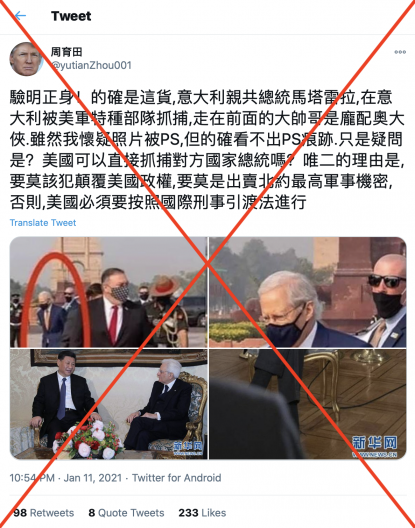 “Fact Checked! This is what happened, the Italian pro-Communist President Sergio Mattarella was arrested by the U.S. Special Forces in Italy,” the Chinese-language tweet reads in part.

“This raises a question, can the United States arrest the president of another country directly?”

Comments on the tweet suggest that other Twitter users believed the photo genuinely showed Mattarella being arrested in the US.

“Yes, of course, because he was involved in the US election,” one commented.

“Seems like it's true, and a person close to Trump's propaganda assistant said that this action was carried out by Pompeo,” another said.

A selection of comments, taken on January 20, 2021, under the misleading post.

A reverse image search on Google found that the man in the background of the photo is in fact former US ambassador to India Kenneth Juster, not Mattarella. 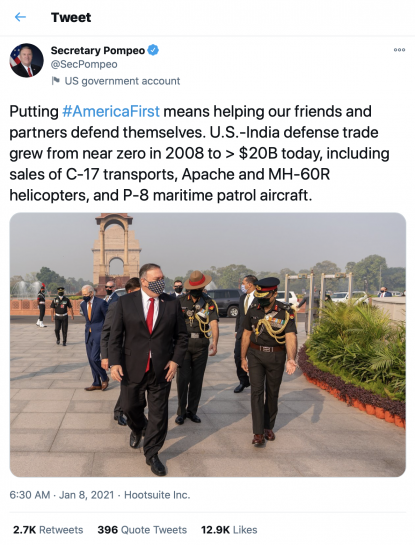 The tweet reads: “Putting #AmericaFirst means helping our friends and partners defend themselves. U.S.-India defense trade grew from near zero in 2008 to > $20B today, including sales of C-17 transports, Apache and MH-60R helicopters, and P-8 maritime patrol aircraft.”

Another reverse image search on Google found that the photo was taken near the India Gate monument in New Delhi.

The photo was taken during Pompeo’s visit to India in October 2020, which the US Department of States detailed here and AFP reported on here.

Several other official photos released during the state visit show that the man in the background of the photo is Kenneth Juster, who was the US ambassador India at the time. He can be seen wearing the same orange tie in a photo released by the Indian government here and a US government spokesperson here. 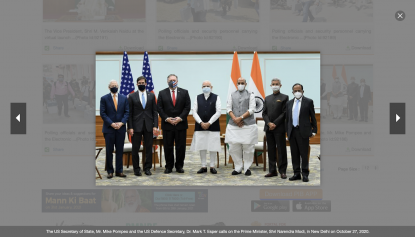 A screenshot, taken on January 20, 2021, of the photo from India Press Information Bureau.

Juster also tweeted about Pompeo’s diplomatic visit and published photos of his arrival here on October 27, 2020.

There are no credible reports or statements indicating that Italian President Sergio Mattarella has been arrested by any law enforcement.