A screenshot of a tweet purported to be from US President Donald Trump criticising South Africa’s dire unemployment rate has been shared hundreds of times on Facebook. While unemployment in the country is sky-high and predicted to climb, the tweet itself comes from a fake Trump Twitter account.

“South Africa has the biggest Unemployment rate in the world #unemployedSA,” reads the tweet. “The South African President is failing to deliver, instead of creating new job for the unemployed, he is busy stealing money from his own people (sic).” 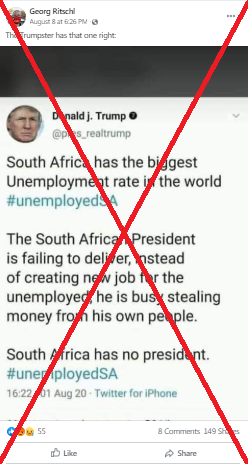 The screenshot also appears here, here, and here in other Facebook posts.

Some Facebook users appear to believe that Trump said these words, with posts saying “1st time hearing trump making sense”, “ouch” or “I concur with bra-Donald”.

The original tweet is from an account called @pres_realtrump and has garnered 55 retweets and 95 likes since August 1, 2020.

Several clues indicate this is not Trump’s official and personal Twitter account. For example, Trump is a prolific Twitter user but the copycat account has fewer than 10 tweets since it was created in July 2020. It also has only 97 followers and the bio reads: “45th President of the United States of Black Twitter”.

Trump’s genuine account, created in March 2009, is verified with a blue tick and has more than 85 million followers. He has also tweeted more than 54,000 times.

Screenshots taken on August 14, 2020 of the fake Trump account (left) and the real one (right)

A search of tweets by Trump on a website that archives his posts shows that while he tweeted and retweeted numerous times on August 1, 2020, none of the tweets from that day were about unemployment in South Africa.

And as reported by AFP, President Cyril Ramaphosa has warned of massive job losses and “tough times” ahead as the country battles through the effects of COVID-19.

Ramaphosa imposed a strict lockdown on March 27, 2020 to try to limit the spread of infections and to prepare hospitals for an expected surge in cases.

This has led to widespread criticism of the government’s approach to the pandemic, especially in light of numerous reports about politicians profiting from lucrative public contracts.