Posts circulating on Facebook claim Donald Trump tweeted before taking office that a sharp drop in the stock market would be grounds for the president’s impeachment. But there is no evidence of such a tweet on his account or in an online search.

“If the Dow drops 1,000 points, the President should be impeached immediately!” the purported Trump tweet says, referring to the Dow Jones Industrial Average, which fell by more than that amount on February 24, 2020.

A screenshot of an alleged tweet taken on February 25, 2020

A similar tweet attributed to Trump, which has been shared on Facebook here and here, says: “If the Dow Joans ever falls more than 1000 ‘points’ in a Single Day the sitting president should be ‘loaded’ into a very big cannon and Shot into the sun at TREMENDOUS SPEED! No excuses!” 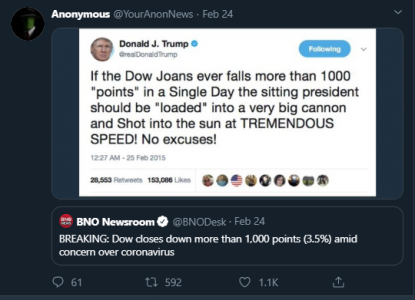 A screenshot of an alleged tweet taken on February 26, 2020

Neither tweet is available on Trump’s verified profile, according to Twitter's advanced search here and here.

And searching for the text of the alleged tweets on Google, which still shows results for tweets that have been deleted, also yields no matches.

The US stock market has been hard hit by fears over the impact of the new coronavirus on the global economy, fluctuating on February 26 after two days of decline.

Trump has repeatedly highlighted stock market growth as a measure of the success of his presidency, touting it as part of his push for a second term in office.