These photos show reservoirs and pipelines from the Great Man-Made River system in Libya, not Egypt

Two photos in a Facebook post have been shared hundreds of times in Ethiopia alongside a claim that they show huge reservoirs in Egypt that are being used to divert water from the River Nile. However, the claim is false; both images show part of the massive hydro system known as the Great Man-Made River (GMR) in Libya.

Written in Amharic, it claims that Egypt has diverted water from the Nile River to storage reservoirs in the Sinai desert, and even into Israel – justification, the post says, for Ethiopia to continue filling its Grand Ethiopia Renaissance Dam (GERD) from the Nile. 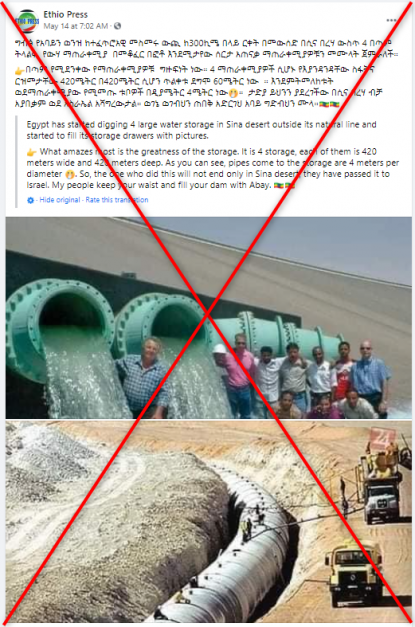 “Egypt has diverted the waters of the Nile 300 kilometres out of its original bed across the Sinai desert using four really big reservoirs as seen in the photo, the filling of these reservoirs has already begun,” the post reads, translated into English. “They have built incredible reservoirs of 420 metres by 420 metres wide and 60 metres long. As you can see the tubes have a four-metre diameter. So these pipes they’ve built do not only cross the Sinai desert, they plan to continue all the way to Israel. My people, watch your back and fill the dam.”

One image shows large pipes disgorging water into a reservoir while a group of people watch, and the second picture shows an enormous underground pipeline being installed.

Ethiopia, Sudan and Egypt have been locked in a tug of war over the use of the Nile ever since Ethiopia started building and filling the GERD using water from the river. Both Egypt and Sudan feel that diverting Nile water into the GERD will restrict water supplies in the two countries, affecting millions of people’s livelihoods.

So far, mediations to end the stalemate between the three countries have failed.

However, the claim that the photos shared on Facebook show water reservoirs in Egypt is false.

Photos are from Libya

By performing a reverse image search, AFP Fact Check found that both photos were taken in Libya and show phased construction of the Great Man-Made River, a hydro project commissioned by former leader Moamer Kadhafi to supply aquifer water to some of the country’s major cities.

The first image was used in a 2008 Al Jazeera article on the Grand Omar Mukhtar, Libya’s largest man-made reservoir. The photo was also used on this Libyan website and more recently in the Libya Herald here.

While the images are not exact, they do show the same pipes inside the reservoir, only from a different angle and without any people in one of them.

The second photo shows a large underground water pipe being laid in the Sahara Desert and, again, is related to the Great Man-Made River. The photo was published here on the Boinc website in Slovak and here in 2011.

The image has also been used in this press statement and a news article about water security in Libya. 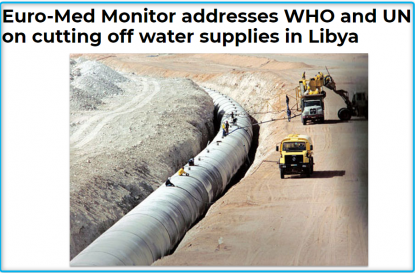 Furthermore, Sami Zaptia, the Editor in Chief at the Libya Herald, confirmed to AFP Fact Check that both images are from Libya’s Great Man-Made River system.

AFP Fact Check confirmed the domain for the authority in charge of the hydro project no longer works. 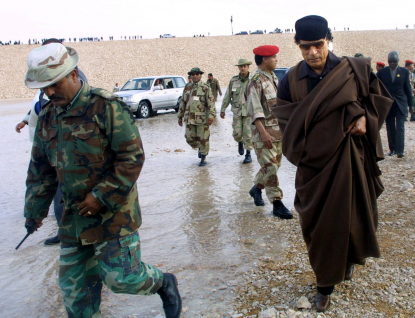 Libyan leader Moamer Kadhafi walks along the shoreline of the Gurdabiya Dam, after the dam's opening ceremony, which is a phase of Libya's Great Man-Made River water project, some 30 kms east of the city of Syrte 07 March 2002. (AFP / Behrouz MEHRI)