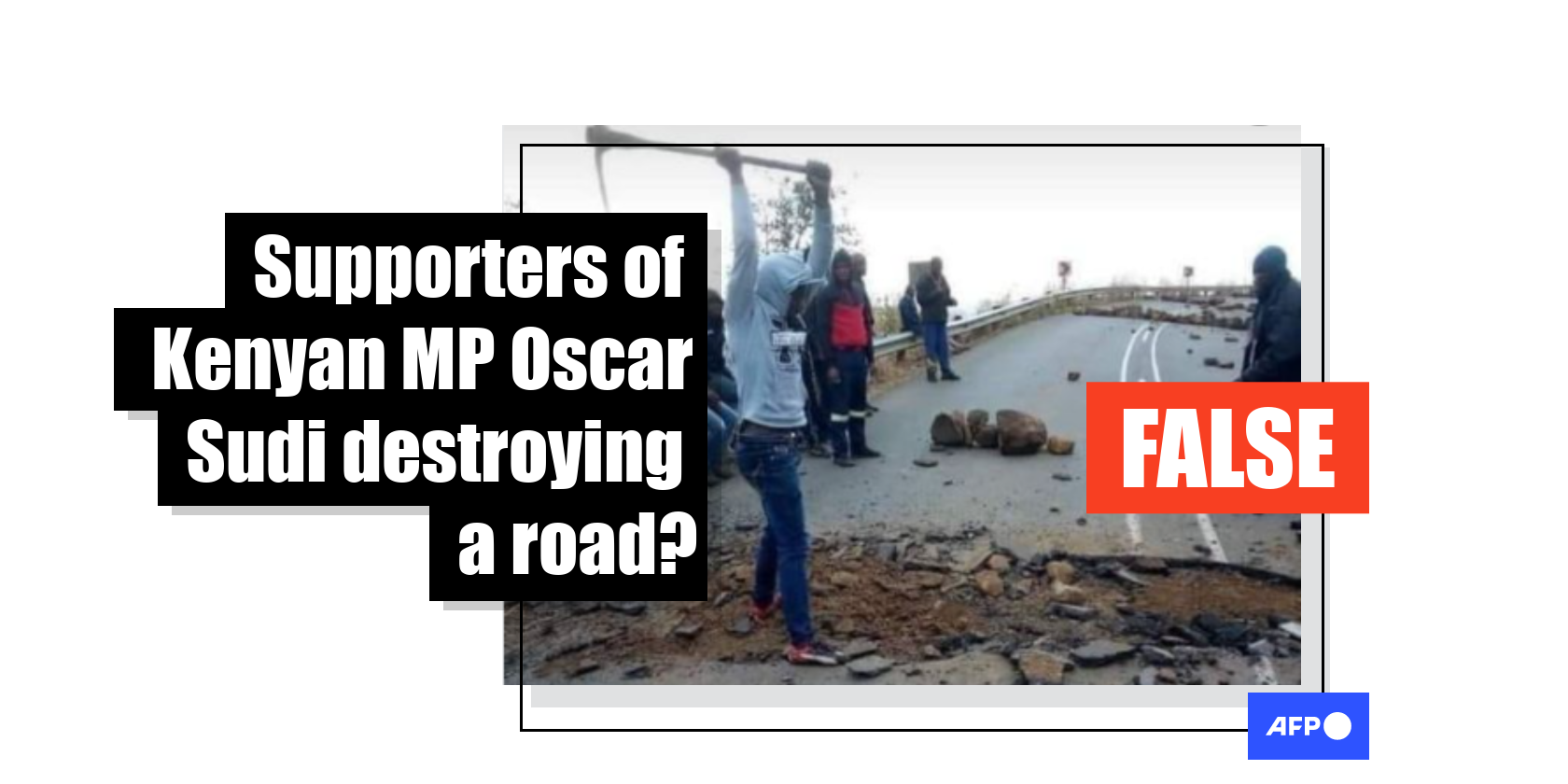 This shows a protest in South Africa, not supporters of a Kenyan MP

An image shared on Facebook purports to show supporters of Kenya’s Member of Parliament Oscar Sudi destroying a road. The claim is false; the image actually shows residents in South Africa protesting over their lack of access to water and electricity.

The image shared here and here on Facebook shows several people, one of them holding aloft a pick, surrounding a damaged section of tarred road.

“SUPPORTERS of Kapseret MP Oscar Sudi arrested after they destroyed sections of a tarmac road using mattocks,” reads the caption. “They claimed that the Government was using police officers to harass their legislator.” Local media reported that prior to his arrest, residents had blocked the road leading to Sudi’s home with logs, stones and tractors to stop police from reaching him.

Not Kenya or Guinea but protests in South Africa

But, a reverse image search shows that the photos were not taken in Kenya, nor in Guinea, but in South Africa, where they have circulated on social media since September 22, 2020.

Local media reports here and here described how angry residents of Msinga local municipality in KwaZulu-Natal province had blocked and destroyed a section of the R33 road between the towns of Pomeroy and Dundee to highlight four years of service delivery grievances with the government in the area.

Photos of the scene were posted to Facebook on September 23, 2020, by the provincial transport department. The post condemned the “destruction of infrastructure and malicious damage to property after members of the community blocked the R33 and dug up the road in protest”.

A spokeswoman for the KwaZulu-Natal transport department, Gugu Sisilana, confirmed the authenticity of the image to AFP Fact Check.

According to the department’s post, three suspects were also arrested “for public violence”.

A few days after the demonstration, a government delegation visited the site in Pomeroy.

A Google Street View of the R33 road between Pomeroy and Dundee presents several visual clues that match the viral photo, including the curvature of the road, the barrier at the edge and identical signs.

While the vegetation and markings on the road are slightly different, this can be explained by the fact that the street view capture was taken a decade ago, in March 2010.

A screenshot of the Google street view taken on October 2, 2020 compared to an image on a Facebook post

One of the photos released by the transport department on September 25, 2020, when compared to a reverse shot of the Google Street View capture above, confirms the location.

This includes the arrangement of trees (green rectangles) and rocks (red rectangle) in the background of the image. A road sign (blue circle) is also recognisable in the two photographs.

Screenshots taken on October 2, 2020 comparing a Google Street View image and a picture posted by the KZN transport department of the same location