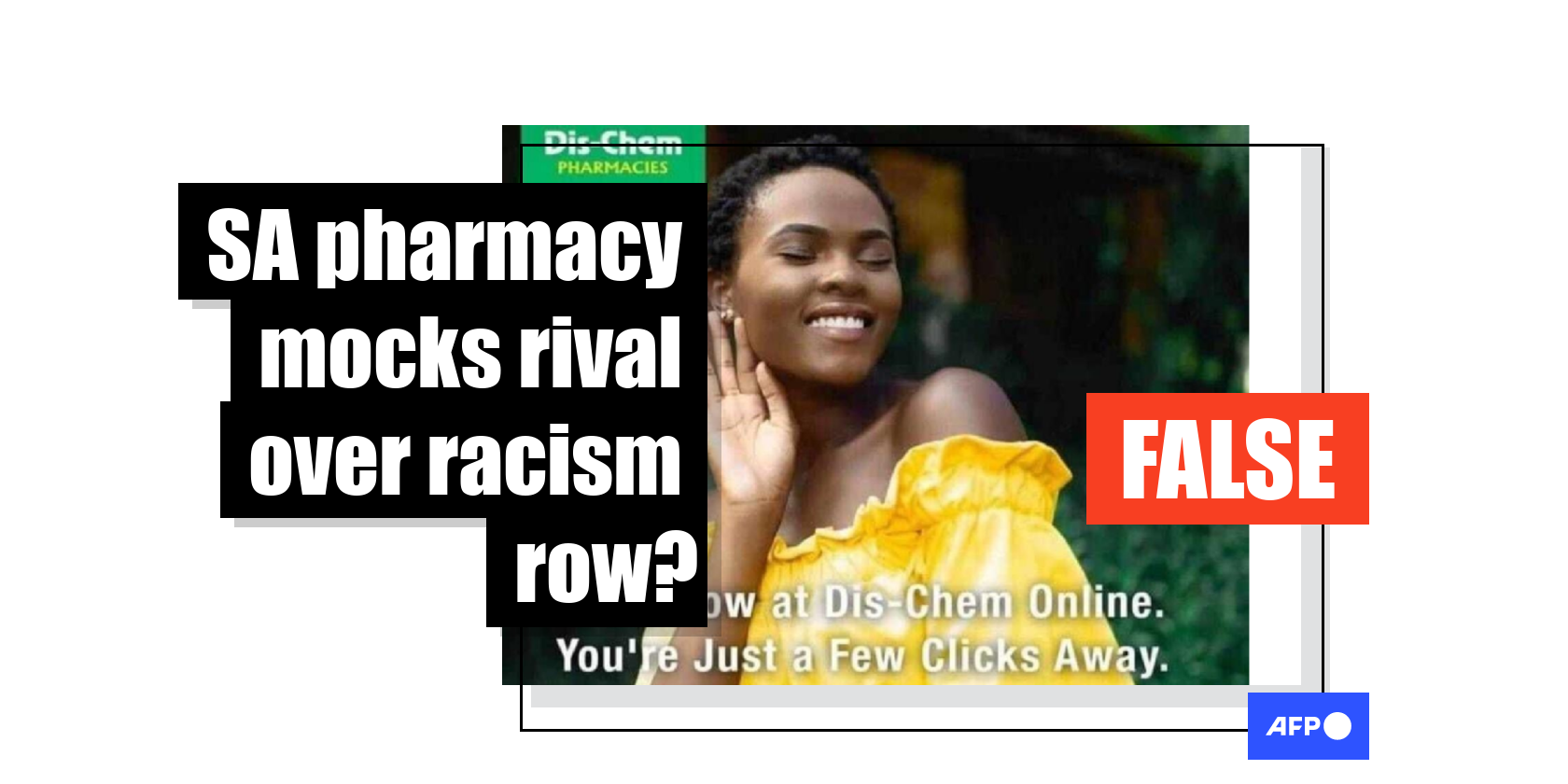 Leading South African pharmacy chain Clicks recently ignited a racism row with a shampoo promotion that described black hair as “dull” and white hair as “normal”. Amid the backlash, a purported advert taking subtle aim at Clicks went viral on social media and appeared to come from rival pharmacists Dis-Chem. However, Dis-Chem moved quickly to dispel the claim with repeated denials online and told AFP Fact Check all of its advertising takes weeks to approve.

As reported by AFP, Clicks Pharmacy came under fire in early September after running an online promotion for shampoo brand TRESemmé that depicted black hair as “dry & damaged” and “frizzy & dull”, and blonde hair as “normal”.

Shortly after the promotion was launched, the alleged Dis-Chem ad appeared online on September 7, 2020.

“Shop Now at Dis-Chem Online. You’re Just a Few Clicks Away,” reads the superimposed text on an image of a smiling black woman with natural hair. Designed to look like an advert, the picture features Dis-Chem's logo in the top-left corner. 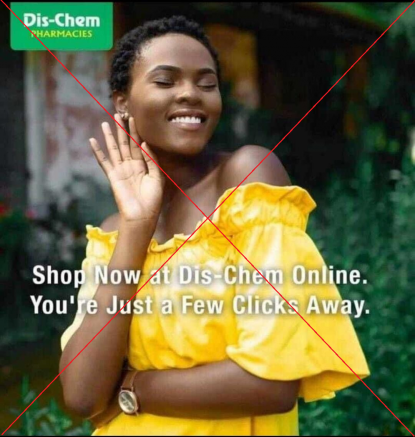 The purported ad has been shared more than 2,000 times on Facebook, including here, here, and here, and in hundreds of tweets. It was seen by many as an opportunistic response by Dis-Chem to a controversy which had engulfed rival company Clicks a few days earlier, starting on September 4, 2020.

Opinion was divided among those who saw it as insensitive and those who found it funny. 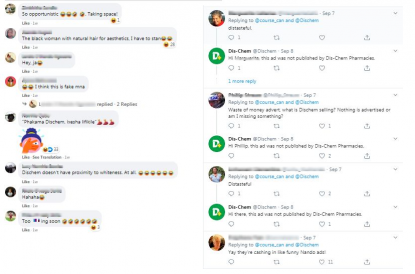 Screenshots taken on September 14, 2020 of social media reactions to the advert

AFP Fact Check traced the earliest reference of the alleged advert to this archived tweet, but the account has since been deleted.

Dis-Chem spent days responding to hundreds of tweets with a standard denial that read: “Hi there, this ad was not published by Dis-Chem Pharmacies.”

Hi there, this ad was not published by Dis-Chem Pharmacies.

Lynne Blignaut, who manages the social media and community engagement team for Dis-Chem, told AFP Fact Check that the “distasteful” advert did not come from the company.

“Our content is created by an agency and is approved weeks in advance. If you take one look at our social media pages you’ll know that it’s not real,” she said.

Blignaut noted that the Dis-Chem logo used in the picture is not high-resolution and that the advert is not in line with the company’s font or general corporate identity.

A reverse image search shows that the photo of the woman in the yellow dress has been available online as a free stock image since at least December 2018.

The furore stemmed from these images used in a Clicks online promotion and led to hashtags like #RacismMustFall and #BlackHairIsNormal, with black women posting images of their afros on Twitter.

Protests were staged outside Clicks Pharmacy stores countrywide, forcing them to close on September 9, 2020 as some demonstrations turned violent.

Multinational goods supplier Unilever, which owns TRESemmé South Africa, issued a statement apologising for using images that “promote racist stereotypes about hair” in the marketing campaign. Despite this, a growing list of retailers have since pulled the hair products brand from their shelves.

Leaders from political party Economic Freedom Fighters, which organised the protests, met with Unilever executives on September 10, 2020, when it was agreed that Unilever would remove all TRESemmé products from retail stores for 10 days “as a demonstration of remorse”.

Joint Statement of The EFF And Unilever On The Tresemme-SA Racist Image pic.twitter.com/IWxr93TSka