As wildfires rage across California, an aerial photo claiming to show clouds glowing red from fires below was shared thousands of times on social media. This is false; the photo depicts a sunset over Hawaii, its photographer told AFP, and it was previously misused to portray blazes in the Golden State two years earlier.

“View of California wildfire above the clouds!” reads the caption of a photo showing an aerial view of clouds across the sky, with a fiery red glowing from below. “Vote like hell,” the post advocates, linking to a voter registration page. 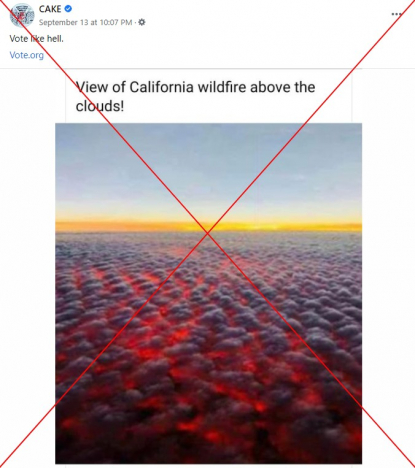 An Idaho weatherman also shared the photo on Facebook, while a Twitter user posted it and blamed President Donald Trump for this “creation of Hell on earth.”

AFP previously found this image being shared out of context during wildfires in the summer of 2018.

The photo was not taken in California, nor does it depict forest fires from above, its author told AFP in 2018.

“It was nowhere near California. This was taken over the big island of Hawaii... on July 22. (This is a) sunset picture at 30,000-feet altitude at about 7:30-8:00 pm-ish (from a plane) flying westbound,” Nathan Province, a Hawaii resident, told AFP via Instagram.

Province published the picture on his Instagram account on July 22, 2018 along with other photos and a video. In the last of these images, the sunset itself is more visible.

According to a 2018 tweet from atmospheric scientist and Federal Emergency Management Agency (FEMA) strategic planner Michael Lowry, “The glow is from a sun angle below the horizontal plane illuminating shallow altocumulus clouds.”

In early September, online users posted aerial photos of a pyrocumulonimbus cloud caused by the Creek Fire near Fresno, California, The Fresno Bee reported. While impressive, the cloud formation does not glow red like the sunset photo.

Today I was flying from San Jose to Las Vegas on SWA & I looked out my window & I saw this cloud. I l found out that it is a cumulonimbus flammagenitus cloud aka pyrocumulonimbus cloud, a type of cloud that forms above a source of heat, such as a wildfire #CreekFire pic.twitter.com/HCqyWiHpNx

Dozens of different sites are burning across the US West Coast, causing at least 35 deaths since the beginning of the summer in the states of Washington, Oregon, and California.

Trump, who flew to California’s capital Sacramento to campaign for his reelection in November, dismissed a warming climate’s links to the fires, during a meeting with state officials on September 14.

Disinformation about wildfire season has included the false claim that members of the structureless political movement Antifa were arrested for arson, which AFP debunked.