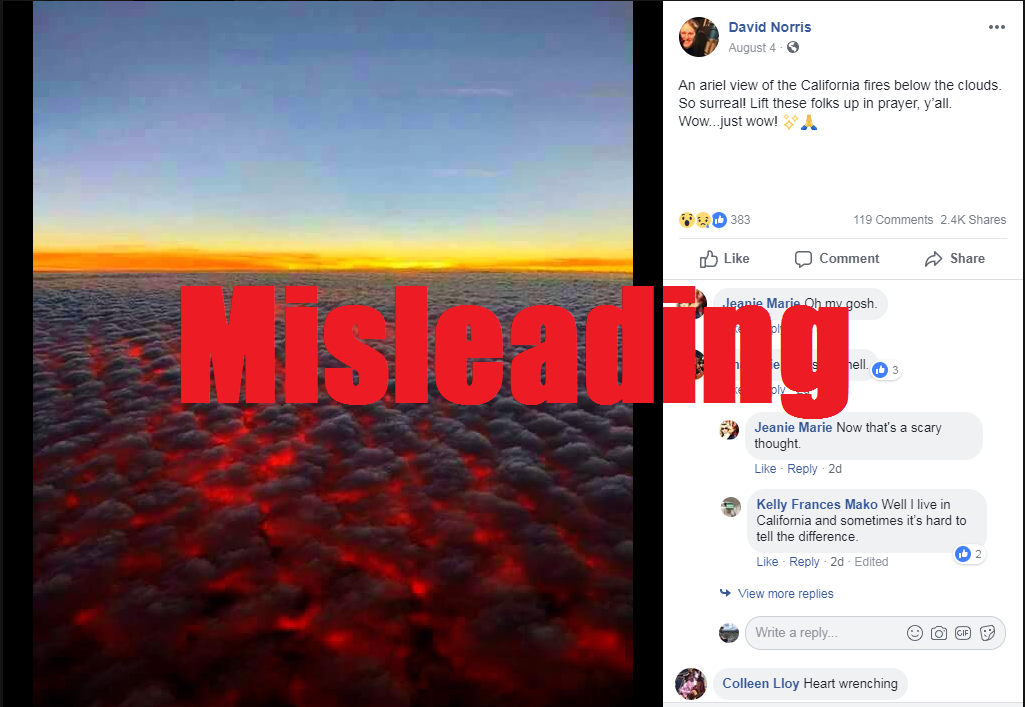 No, this isn’t a photo of the California sky turned incandescent by forest fires

A photo depicting fiery red clouds was shared tens of thousands of times on social networks between August 4 and August 7. Many internet users maintain that it is an aerial view of clouds gathered above one of the fires currently ravaging California. The shot actually shows a Hawaiian sunset from July 2018.

On Facebook, some presented the photo as “Clouds above the California Carr fire” , while others lamented: “My heart goes out to California and all fighting this fire and all who have lost family, friends and homes to this blaze.” 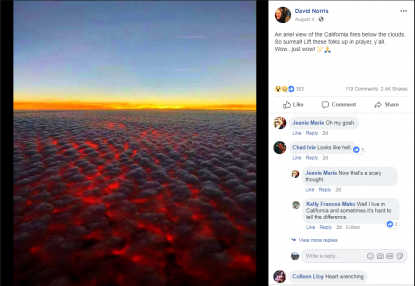 According to many users who shared it, this photo is an aerial view of a cloud formation above California, which is currently fighting the most devastating fires in its history.

The Carr fire mentioned in one of the comments above is just one of 20 fires still burning in the state as of August 7, 2018. The Mendocino Complex Fire is now the largest in the Golden State’s history.

However, this photo was actually shot more than 3,500 kilometers (2,200 miles) away from California in July, the photographer of the original picture told AFP.

“It was nowhere near California. This was taken over the big island of Hawaii ... on July 22. (This is a) sunset picture at 30,000-feet altitude at about 7:30-8 pm-ish (from a plane) flying westbound for the island of Oabu,” Nathan Province, a Hawaii resident, explained.

"I have come to cast fire upon the earth; and how I wish it were already kindled! (Inside our hearts) . Luke 12:49. . . . . . My eyes reflected the image of love, and in that moment I knew Your fire in me would never burn to embers... . #nofilter #Love #30000feet #Oahu #Honolulu #sunset @earthpix @followmefaraway

Province had published his picture on his Instagram account on July 22, at the same time as other photos and a video taken a few minutes apart. On these last images, the sunset manifests itself more visibly.

Other images (such as some of these) taken from planes and published on the internet over the past years, show glowing skies turned fiery red by sunsets.

Photos of fires under clouds on Russian search engine Yandex

According to a tweet from atmospheric scientist and Federal Emergency Management Agency (FEMA) strategist Michael Lowry, “The glow is from a sun angle below the horizontal plane illuminating shallow altocumulus clouds.”