A claim that the word “hangover” is derived from the historic practice frequented by British sailors during the reign of Queen Victoria, who bought “access to bend over a rope” after a heavy night of drinking has been shared hundreds of times on Facebook. However, this claim is false; sn expert called the claim “nonsense” and said the term is a derivative of an earlier word meaning “after-effect”.

The claim was published here on Facebook on August 28, 2020. It has since been shared more than 170 times.

The post features an image that appears to show several men sleeping by leaning on a rope while standing.

The text overlay above this image reads: “The lowest form of accommodation in Victorian England was access to bend over a rope for the night at the price of a penny. Usually used by drunken sailors who had spent all their money drinking. It’s said to be the origin of the term hungover.” 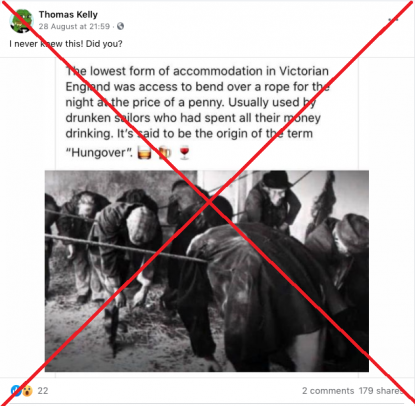 The post’s caption reads: “I never knew this! Did you?”

Identical claims have also been shared thousands of times on Facebook after being published here, here, here and here.

Daniel Van Olmen, an associate professor of historical linguistics at the UK’s University of Lancaster, told AFP the claim is “nonsense”.

“[This] example (also from the OED) [‘that easily inspired hatred of Germany remained as a hang-over in America long after it had been thrown over by the British’] illustrates this earlier sense of hang-over, which also still exists in Present-day English of course.

“It is not hard to see how hang-over acquired its alcohol-related sense, given that a hang-over is the after-effect of drinking too much.”

Below is a screenshot of the English Oxford Dictionary entry for hangover, with the entry referenced by Van Olmen highlighted in yellow.

Screenshot of the OED with the example used by Associate Professor Van Olmen highlighted in yellow, taken September 11, 2020.

A reverse image search of the image in the Facebook post found the original published here on Getty Images, with the title: “Actors ‘Sleeping’ Draped Over Ropes”. The image shows a re-enactment of the practice for the movie The Great Train Robbery.