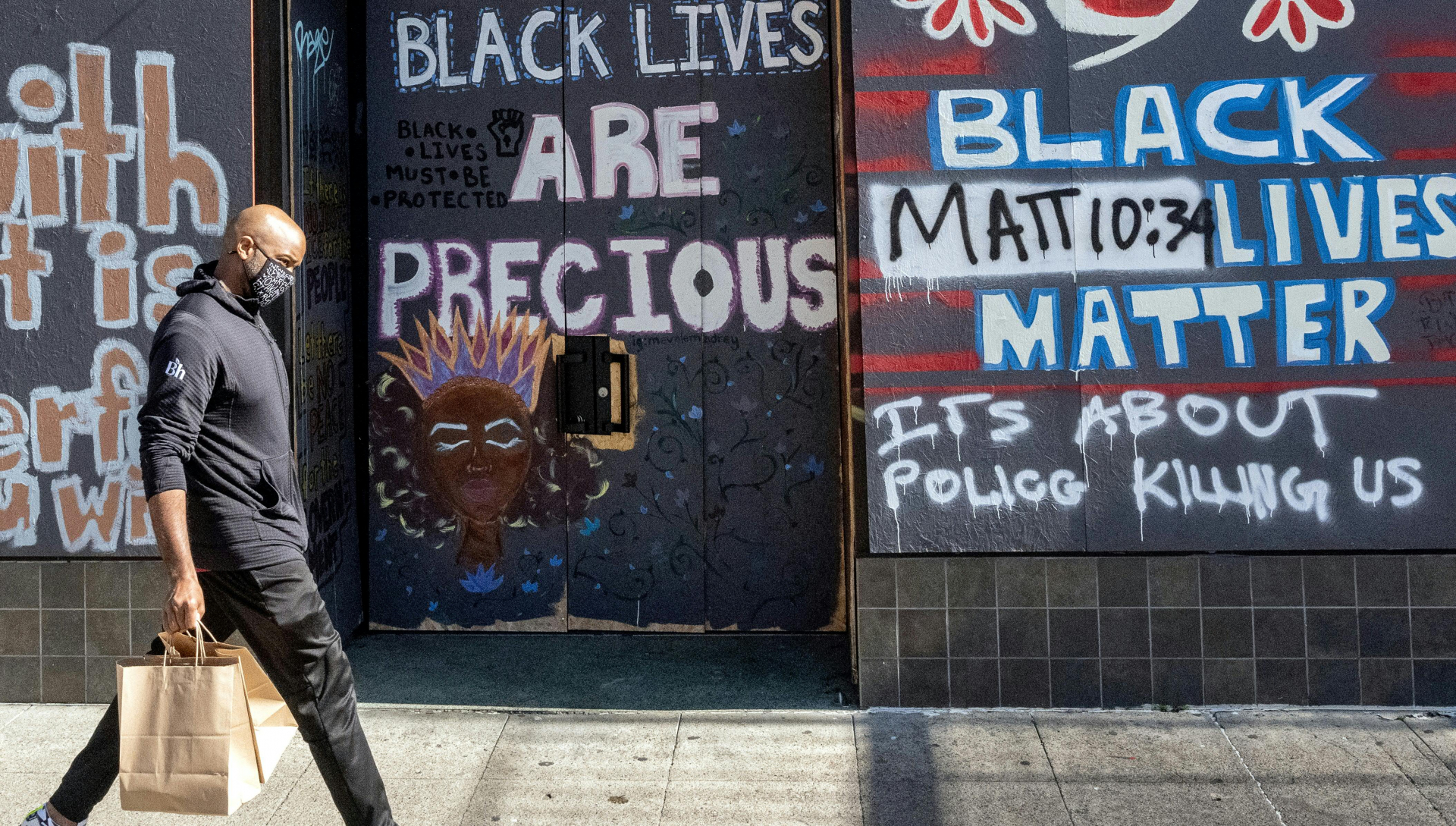 A person wearing a face mask walks past a boarded-up shop with slogans about the Black Lives Matter movement, in Oakland, California on February 12, 2021 (AFP / Josh Edelson)

Social media posts claim Democrats are responsible for crises that mirror some of the worst events of the past century. The claims, however, are false or misleading; the pandemic originated in China, not the US, ongoing economic problems stem from a recession that the coronavirus caused, rather than new government policies, and protests about race peaked in 2020 under Republican president Donald Trump, long before Joe Biden entered the White House. 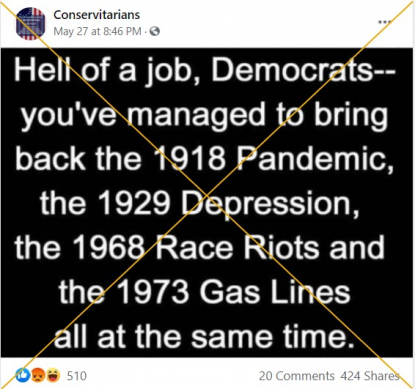 Comments attached to the posts made clear that they are referring to Biden, a Democrat, and his administration.

Claim: Democrats brought back the 1918 Pandemic

The coronavirus pandemic is the worst since the 1918 flu, though the more than 174 million cases and 3.7 million deaths resulting from it remain far below those of the outbreak a century ago which infected roughly 500 million people around the world, killing at least 50 million, according to estimates cited by the US Centers for Disease Control and Prevention (CDC).

China’s Hubei province was the source of the virus in late 2019 before it spread globally, including to the United States where Trump, not Biden, was then US president.

Data from the CDC show that a seven-day moving average for cases of Covid-19, the disease caused by the coronavirus, peaked at 250,910 on January 9, 2021. Biden took office 11 days later.

The moving average for Covid-19 deaths reached its highest point on January 13, 2021, before fatalities and cases declined steadily after millions of vaccinations were administered during the Biden administration.

The year-end surge in US cases and deaths followed November’s Thanksgiving holiday, as well as Christmas when large groups gathered despite public health guidance advising them not to.

Claim: Democrats brought “back” the 1929 Depression

The Great Depression which began in 1929 lasted more than a decade until the United States entered World War II. At its low point, it left more than one-quarter of the American labor force out of work.

In April 2020 the coronavirus pandemic and efforts to contain it, including restrictions on restaurants, sports venues and other businesses, eliminated 20.5 million jobs.

The official US unemployment rate rose to 14.7 percent, from 4.4 percent a month earlier, its highest since authorities began reporting seasonally adjusted joblessness figures in 1948. However, many millions more are thought to have been uncounted because they relied on the so-called “gig economy” or the black labor market and did not claim benefits, at least initially. A lack of consumption meant a lot of such work dried up when the US economy plummeted.

Given the unemployment levels, Federal Reserve Chairman Jerome Powell was asked in a May 2020 “60 Minutes” interview whether a Great Depression comparison was appropriate.

“No, I don’t. I don’t think that’s a likely outcome at all. There are some very fundamental differences,” Powell said. There would be “a very sharp downturn” which “should be a much shorter downturn than you would associate with the 1930s,” he added.

Powell made similar comments at a press conference the following month when he said the Great Depression is not “a model for what’s happening.”

The National Bureau of Economic Research, the arbiter of business cycle contraction and expansion, declared on June 8, 2020 that “the beginning of a recession” occurred when monthly economic activity peaked in February 2020, ending more than a decade of expansion.

A committee which made the decision noted “special circumstances associated with the pandemic of early 2020.” It did not mention a “depression.”

“Recession” is the term which other economists also used, while the Federal Reserve Bank of St Louis titled a paper: “Comparing the Covid-19 Recession with the Great Depression.”

From its peak of almost 15 percent, the unemployment rate declined through the remaining months of Trump’s presidency and continued to fall early in Biden’s term as the economy began to recover. 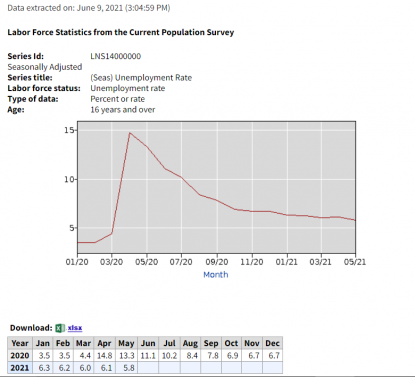 The first quarter of 2021, covering Biden’s initial months in office, showed real gross domestic product growth at an annual rate of 6.4 percent, according to Commerce Department Bureau of Economic Analysis (BEA) data released in May.

“The increase in first quarter GDP reflected the continued economic recovery, reopening of establishments, and continued government response related to the Covid-19 pandemic,” the Bureau wrote.

Most protests against police brutality and racism did not occur during the Biden administration but the previous year, when Trump was in the White House. They were the largest street demonstrations since the 1960s, and AFP has previously debunked attempts to associate Democrats with the arson and violence that accompanied a minority of those gatherings, although some Democratic lawmakers vocally supported the protests.

The marches were sparked by the May 25, 2020 killing in Minneapolis of George Floyd, a Black man, by white police officer Derek Chauvin who was later convicted of murder and awaits sentencing. Floyd’s death reverberated around the world in the Black Lives Matter movement (BLM), and led the US to examine its legacy of slavery.

The Armed Conflict Location and Event Data Project, analyzing media and other sources, found more than 11,000 reported demonstrations associated with the BLM movement around the United States from early 2020 to April 30, 2021.

It said “demonstration rates have declined significantly since the heights of summer 2020,” although events have continued well into 2021.

About 94 percent of pro-BLM demonstrations were peaceful, said the report, “A Year of Racial Justice Protests: Key Trends in Demonstrations Supporting the BLM movement.” 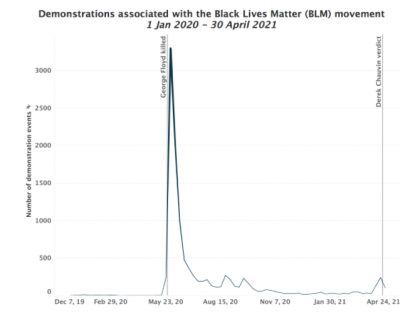 There were fuel shortages and long lines to buy gasoline in parts of the United States in May 2021, as shown in this AFP photo, four months after Biden became president. 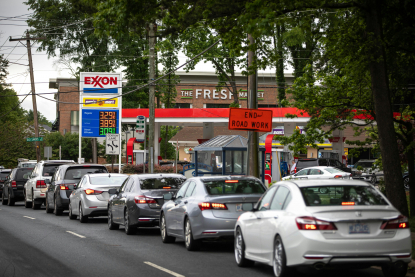 Motorists line up at a gas station soon after its supply was replenished in Charlotte, North Carolina, on May 12, 2021 (AFP / Logan Cyrus)

However, the shortages came after Russian-based cyber-extortionist Darkside forced the temporary shutdown of a pipeline network shipping fuel through much of the eastern United States. The incident drew comparisons to a 1973 oil embargo that also led to lines at US gas pumps.

In 2021 gasoline prices have risen because of higher global crude prices and an uptick in demand following the pandemic-related collapse when far fewer motorists took to the roads and industrial production declined.