A Facebook post claiming to show the devastating aftermath of two blasts in Beirut has been shared hundreds of times in Kenya. However, some of the images are old and in fact, show scenes from attacks in the Lebanese capital dating as far back as 2007.

As reported by AFP, Prime Minister Hassan Diab said that 2,750 tonnes of the agricultural fertiliser ammonium nitrate -- stored for years in a portside warehouse -- had blown up, sparking "a disaster in every sense of the word".

A Facebook post shared on a Kenyan Facebook page published multiple photographs purportedly showing the aftermath of the incident with the caption: "A moment of silence for the Lebanese Nationals... so sad". 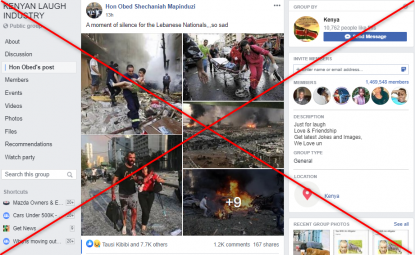 However, reverse image searches revealed that while some of the pictures were indeed taken following Tuesday's explosions, others were old photos of attacks in Beirut.

The image showing a man carrying a little boy across rubble was actually taken in 2012 following the explosion of a car bomb in Beirut.

We located the picture in several reports including here and here. It was snapped by an Associated Press (AP) photographer and is featured on the news agency’s website here.

The picture showing rescuers wheeling away an injured person is not recent either. It was captured in 2007 during another explosion in Beirut targeting Christian lawmaker Antoine Ghanem.

The photo was used in a report here and can be found on AP’s website here.

The photo showing two men running away from a burning car was taken in 2013 during a double explosion at the Iranian Embassy compound in Beirut. The picture can be found on AP’s site here.

The last image in the post is a montage that includes two screengrabs from an interview that Beirut governor Marwan Abboud gave shortly after the blast, in which he can be seen crying, as well as a photo of the rubble from the European Press Agency.

Screenshot from the European Press Agency's website, taken on August 5, 2020