Social media users are sharing an image of what appears to be US comic Sam Hyde in a fighter jet cockpit as proof that he is the mythical “Ghost of Kyiv” responsible for shooting down numerous Russian jets amid the country’s invasion of Ukraine. This is false: while the existence of the viral “Ghost of Kyiv” is unsubstantiated, AFP Fact Check found that an image of a US pilot has been edited to add Hyde’s face. This claim has nevertheless been taken seriously by some social media users who are not familiar with the US comic. It is part of a long-running hoax linking the comedian to tragic events worldwide.

The claim was published on a Nigerian Facebook page called “WAFFI TV” on February 25, 2022, a day after Russia’s deadly invasion of Ukraine. 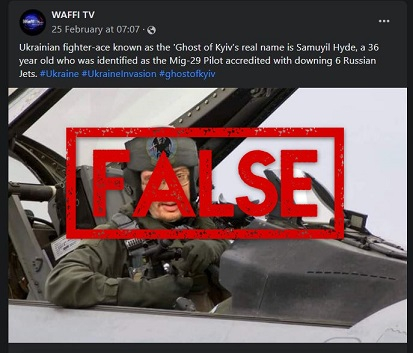 “Ukrainian fighter-ace known as the ‘Ghost of Kyiv’s real name is Samuyil Hyde, a 36 year old who was identified as the Mig-29 Pilot accredited with downing 6 Russian Jets (sic),” reads the caption on the post.

The same claim was tweeted here with the same photo.

The posts create the impression that “Samuyil Hyde” is the hitherto unidentified Ukrainian combat pilot nicknamed the Ghost of Kyiv who is purportedly responsible for shooting down six Russian fighter jets.

Who is Sam Hyde?

Hyde, who is known for his internet pranks, co-founded the comedy group Million Dollar Extreme. The group was behind a 2016 television series on Adult Swim called “World Peace”.

A 2019 BuzzFeed News report by misinformation specialist Craig Silverman explained how Hyde had become the target of hoaxes claiming he was responsible for nearly every recent mass shooting.

These accusations made “Sam Hyde is the shooter” into a popular internet meme. 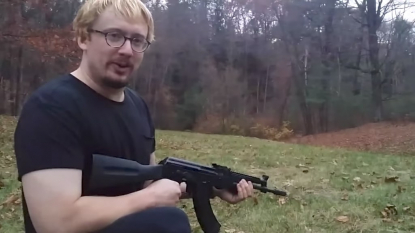 For instance, on November 5, 2017, an unidentified gunman opened fire on worshippers at First Baptist Church in Sutherland Springs, Texas, killing 26 people. Democratic representative Vicente González of Texas later fell for the long-running hoax by telling CNN that the shooter was identified as Hyde, according to the New York Times.

“Apparently, his name was released as Sam Hyde,” González told CNN. “That was a name I was — I was given. We don’t know any more details.”

Just like González, Republican representative Adam Kinzinger more recently fell into the same trap. The politician tweeted the claim about Hyde being the “Ghost of Kyiv” and deleted it after 17 seconds, according to Politwoops, which tracks deleted tweets by public officials

There is no evidence the “Ghost of Kyiv” even exists, but if he or she does, it’s not Hyde in the cockpit. The image has been digitally altered to add his face.

A reverse image search led to this 2018 article on Air Force Times which published the unedited version of the picture. 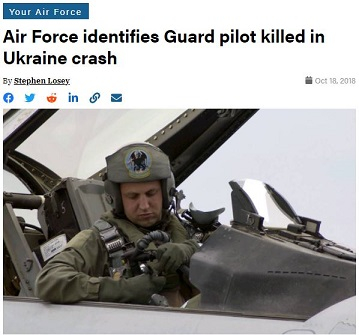 The caption in the story explains that the image was actually taken in 2004 as “then-Capt. Seth Nehring prepares himself for a mission in an F-16 Fighting Falcon during operation Cooperative Cope Thunder at Eielson Air Force Base, Alaska …”

Nehring, however, was killed in 2018, according to the article, and the crash that ended his life happened during a training exercise – in Ukraine. A Ukrainian pilot also died.