Skip to main content
A picture taken in September 2005 shows Ukraine's Snake Island, which was owned by Romania until 1948 when it was ceded to the then-Soviet Union ( AFP / Genya Savilov)

Ukrainian island defenders were captured by Russia, not killed

Social media posts, online articles and Ukraine's president hailed 13 of the country's border guards as heroes, saying they were killed on a small Black Sea island after rejecting a Russian warship's surrender demand. But Kyiv's navy later admitted the troops were captive rather than dead, and Moscow said dozens had surrendered.

"'Russian warship, go fuck yourself.' Those were the last words broadcast by a Ukrainian border guard on Snake Island in the Black Sea," says a February 25, 2022 Facebook post.

"All 13 guards were killed in the naval and air bombardment that followed," it says. 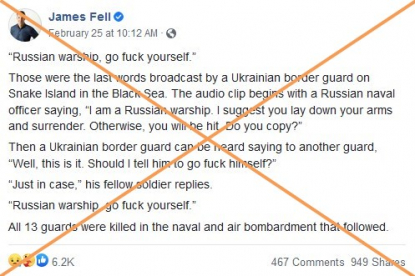 Similar claims were shared on Twitter and Facebook, and spread by Canadian and American news organizations -- part of a flood of inaccurate information circulating online about the war sparked by Russia's invasion of Ukraine.

The Ukrainian coast guard announced on February 24 that small but strategic Zmiinyi (Snake) Island, located in the Black Sea, was targeted by "threats" from approaching warships. This was followed by a statement saying the island had been "captured" and that contact with the troops had been lost.

Anton Gerashchenko, advisor to the Ukrainian Ministry of Internal Affairs, said in a Facebook post that the 13 border guards had been "killed" and linked to the audio recording of the conversation on Telegram. The recording has circulated widely online.

Ukrainian President Volodymyr Zelensky praised the border guards in a speech, saying they died heroically. But Russian press agency TASS reported that Igor Konashenkov, spokesman for the Russian Defense Ministry, said 82 members of the Ukrainian military had instead surrendered.

The Ukrainian navy released a statement on Facebook on February 28 saying that the Snake Island troops were in fact not dead but detained. "We are glad to know that our brothers are alive and doing well," it said.

Despite this, few of the social media posts claiming they died have been updated, and people continue to share and interact with inaccurate content about the incident.

The situation illustrates the "fog of war" and "the desire for propaganda" on both sides, according to Arnaud Mercier, a professor of communications at the Université Paris-II Panthéon-Assas who wrote a book about political communication during the war in Iraq.

"The Ukrainian authorities preferred to over-interpret rather than to wait for confirmation, to make a first moment of heroism for the war," Mercier said.

This led to the Russian army claiming that the Ukrainians were making up tales about the conflict for propaganda. "They tried to make this story a symbol that would show that all other forms of Ukrainian heroism would be lies," he said.