Skip to main content
Mourners offer funeral prayers for bomb blast victims a day after a suicide attack at a Shiite mosque in Peshawar on March 5, 2022. ( AFP / ABDUL MAJEED)

Following a suicide attack on a mosque in northwestern Pakistan in March 2022, an image of an injured child was shared hundreds of times in social media posts that claimed it shows a victim of the bombing. However, the photo has been shared in a misleading context; it is actually an AFP photo of a child injured in Syria after an air strike in January 2020.

The image shows a child whose face is bruised and bandaged.

The post's Urdu-language caption translates to English in part as: "Condolences to the mother of this little, innocent martyr. #Shiagenocide #PeshawarBlast." 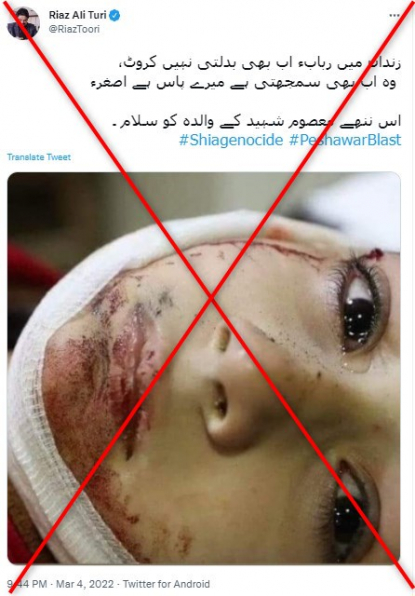 The post's hashtags refer to a suicide attack on a Shiite mosque in Sunni-majority Pakistan's northwest city of Peshawar on March 4, the country's deadliest since 2018.

Peshawar police said 62 people -- including seven children aged below 10 -- died in the bombing, which was claimed by the Islamic State group, AFP reported.

The image was shared hundreds of times alongside a similar claim on Facebook here, here, here, and here; and on Twitter here.

However, the image has been shared in a misleading context -- it actually shows a child who was injured in an air strike in Syria.

The original photo can be seen in AFP's archives here.

"An injured Syrian child cries after being transported to a clinic for treatment following an air strike by pro-regime forces on the northwestern city of Idlib on January 11, 2020," the photo's caption reads.

Below is a screenshot comparison of the image in the misleading posts (left) and the AFP photo (right): 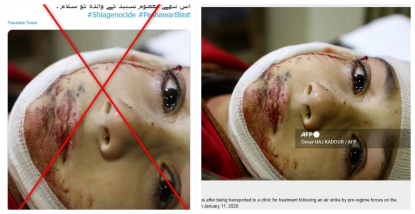 AFP reported on January 11, 2020 that the air strikes in Idlib had killed 18 people, including six children.

The same image also circulated in misleading posts after a deadly attack on an Islamic seminary in Peshawar in October 2020, as debunked by AFP here.