Social media posts circulating globally following Russia's invasion of Ukraine have shared an image with the claim that it shows a genuine Time magazine cover that depicts Russian President Vladimir Putin with the nose and moustache of Adolf Hitler. However, the image shows an artwork that was created by a graphic designer, who said it was not intended as a Time cover. The magazine has also told AFP that the image "is not an authentic Time cover".

"Time magazine cover," reads the caption to the image in simplified Chinese characters and in English. 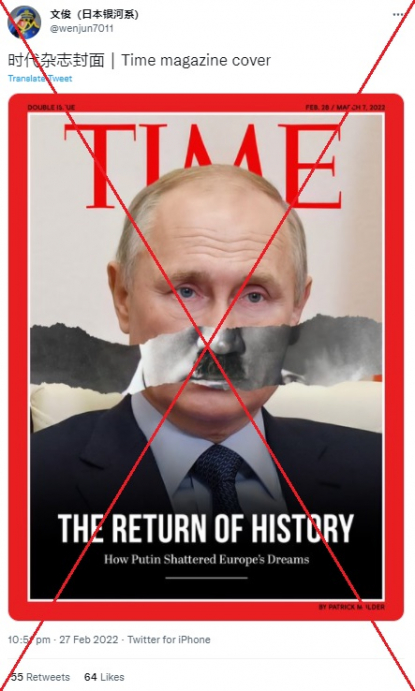 The invasion ordered by Russian President Vladimir Putin on February 24, 2022, has pushed more than 1.7 million people across Ukraine's borders in what the UN calls Europe's fastest growing refugee crisis since World War II. AFP reported on the developments here.

The identical image was also shared alongside a similar claim in Spanish, Portuguese, Romanian and Arabic.

But these posts are false.

A search on Time magazine's archives did not find the purported cover.

The genuine magazine cover of the February 28/March 7, 2022, edition can be seen here, featuring Time's Kid of the Year.

However, Time did publish a magazine cover titled "The Return of History: How Putin Shattered Europe's Dreams" with the publication date March 14/March 21, 2022. It uses a different picture: soldiers in a tank.

The same magazine cover also appeared in this Time photo gallery, headlined: "'We Will Defend Ourselves.' Photographs of Ukraine Under Attack," published on February 24, 2022.

The photo's caption reads: "A Russian tank enters a region controlled by Moscow-backed rebels in eastern Ukraine on Feb. 24, 2022," and it is credited to Moscow-based photographer Nanna Heitmann.

A representative of Time magazine confimed to AFP that the image shared in the misleading posts "is not an authentic Time cover".

In the genuine Time magazine cover, text in the lower right portion reads: "time.com", while in the purported cover shared in the misleading post, it says: "Patrick Mulder".

In a Twitter thread on February 27, 2022, he posted the Putin-Hitler image and a video to explain the design process.

He also tweeted a statement the following day, saying that his artwork does not show a genuine Time magazine cover.

"I created the Time magazine cover artwork on the day Russia invaded Ukraine," Mulder wrote. "It wasn't originally intended to be a Time cover ... I felt the official cover by Time was uninspired and lacked conviction given the unprecedented events unfolding before our eyes."

This is the second edition of a rework I made of this month's TIME magazine cover. I felt the official choice was somewhat uninspired. Watch the process here: pic.twitter.com/O69drD2bAr

Mulder's magazine cover also uses different fonts from the ones used in the genuine Time cover.

Below is a screenshot comparison of the magazine cover made by Mulder (L) and the genuine Time cover (R), with different features marked by AFP: 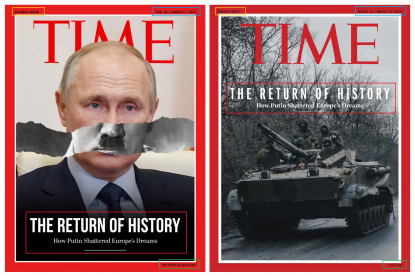 Mulder also shared his two other redesigns of the magazine's cover on Twitter here.

AFP has previously debunked fake Time magazine covers here and here, and a false claim about the Time 100 list.

Russia's invasion of Ukraine has triggered a wave of misinformation, which AFP has debunked here.