These photos do not show Indonesian 'natural body-whitening formula' inventors

Two photos are circulating on social media alongside a claim they show Indonesian inventors winning awards for a "natural body-whitening formula". The claim is false; one photo shows a valedictorian at a university graduation ceremony in 2020, while the other photo shows an aesthetic dermatologist receiving an award in 2021 for her services during the pandemic.

The first photo, which shows a young woman wearing a black graduation cap and gown, was shared here on Instagram on February 16, 2022, garnering more than 870 likes.

"Viral! This student receives the highest award for inventing a natural body whitening formula without injection and beauty equipment that can obtain results within a week," reads the Indonesian-language text superimposed on a picture. 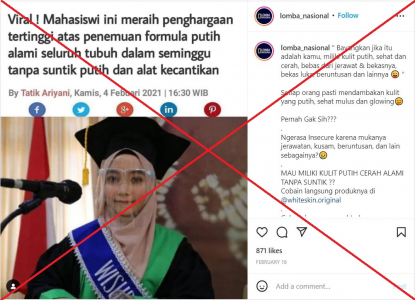 The second photo, which shows a different woman holding a trophy, circulated in Facebook posts here, here and here that said it showed a woman called Ayu Widyaningrum winning an award for "inventing a body-whitening formula without injection and beauty equipment".

The image appears to show a screenshot of a news report from Indonesian news portal Suara.com on December 21, 2021, headlined: "TRENDING TOPIC! Dr. Ayu Widyaningrum accepts an award for inventing a body-whitening formula without injection and beauty equipment. A must try for anyone seeking brighter skin as their 2022 resolution". 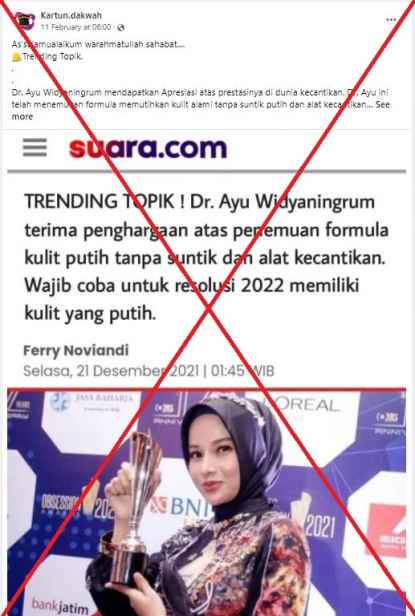 Screenshot of the second misleading post, taken on March 9, 2022

However, the claims are false. Neither photo shows women winning an award for creating a "natural body-whitening formula".

A Google reverse image search found the first photo in an article from November 7, 2020, by Indonesian state-run news agency Antara.

According to the article, the photo shows Auladina Shalihah, a valedictorian at Antasari State Islamic University of Banjarmasin, in the Indonesian province of South Kalimantan, on November 7, 2020. She graduated with a degree in Islamic pedagogy, it adds.

Below is a screenshot of the Antara report: 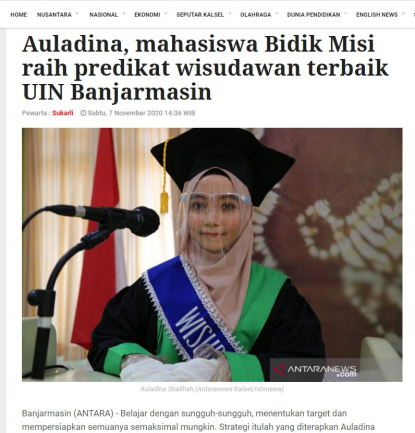 Screenshot of the Antara report

A press release from the university about Auladina being named valedictorian at a graduation ceremony on November 7, 2020, uses a similar photo of Auladina.

Both the Antara report and the university's press statement do not mention any skin-whitening treatment.

Below is a screenshot comparison of the photo in the misleading post (L) and the picture from Antara (R):

A reverse image search of the second image found it was a doctored screenshot of a Suara.com report.

The original article, also published on December 21, 2021, shows the same picture, the same publishing time and the same reporter's name.

However, the headline is different — it says: "Dr Ayu Widyaningrum receives Obsession Award in front of Jakarta Governor Anies Baswedan."

Below is a screenshot of the genuine Suara.com report: 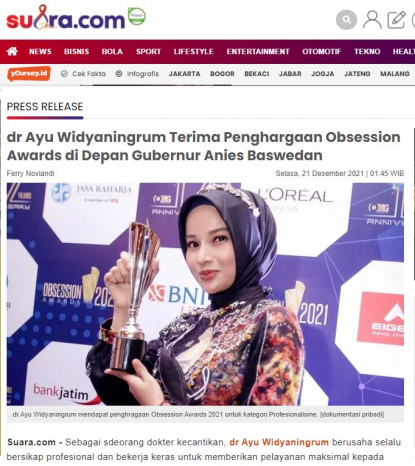 Screenshot of the genuine Suara.com report

The report states that Dr Ayu received the award in the "Professionalism" category for "her dedication to offering beauty aesthetic services to clients during the pandemic".

In this interview with a YouTube channel called Women's Obsession on December 22, 2020, she talked about the challenges of providing dermatology services during the pandemic.

Dr Ayu's award was reported in late December 2021 by various media outlets, such as Detik and Media Indonesia.

Below is a screenshot comparison of the photo in the misleading post (L) and the picture in the genuine Suara.com report (R):

Screenshot comparison of the photo in the misleading post (L) and the picture in the genuine Suara.com report (R)

Keyword searches did not find any credible results about the purported invention of body-whitening formula by Indonesians.

AFP has previously debunked false claims about Indonesian inventors of a "magical skin-whitening formula" and a "permanent weight-loss formula".