This photo shows Indonesian students who won science awards in US, not student inventor of 'weight-loss formula'

Social media posts purport to show a photo of an Indonesian student who invented a "permanent weight-loss formula" at a US university in 2019. The claim is false; the photo shows Indonesian students who grabbed meteorological, psychological and geosciences awards at a scientific competition in Los Angeles in 2017.

The photo was posted on November 30, 2021, here on Instagram, where it has garnered more than 70 likes . 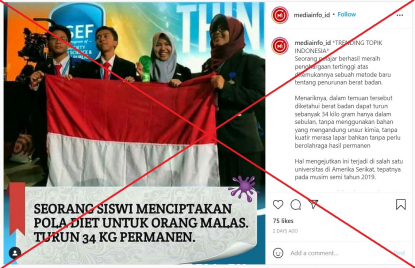 "This unexpected thing happened at one of universities in the United States, precisely in spring 2019," the post's Indonesian-language caption claims.

"Everybody stood up and gave a big applause to an Indonesian girl for ten minutes at a world-class event in new york the united states.

"Indah Kusumwati is an Indonesian student who was successful in inventing a unique formula that can reduce weight in a short period, without having to limit food intake."

The caption further says that "the medicine has been created and shown positive results in creating a diet pattern for lazy people to lose weight permanently."

Some of the posts identify the purported Indonesian student inventor with different names: "Indah Kusumastuti" or "Rina Kusumastuti".

A Google reverse image search found the same photo appeared in this May 24, 2017, article on the website of Indonesia's Education, Culture, Research and Technology Ministry.

Below is a screenshot of the photo on the Education Ministry's website: 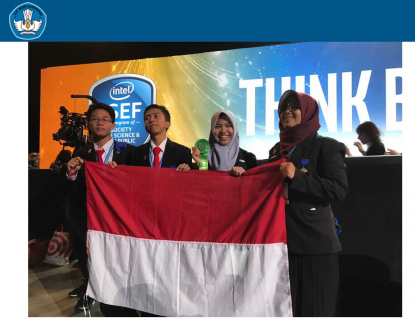 Screenshot of the photo on the Education Ministry's website

The four students were listed as Intel ISEF's award winners in this May 18, 2017, announcement from the US-based Society of Science.

Keyword searches did not find any credible results about the purported invention of permanent weight-loss formula by an Indonesian student called either Indah Kusumwati, Indah Kusumastuti or Rina Kusumastuti.

AFP previously debunked another false claim about an Indonesian student who invented a "magical body-whitening formula" at a US university.