Following Russia's invasion of neighbouring Ukraine, images purporting to show Ukrainians rallying in support of people in coup-hit Myanmar have been shared hundreds of times on Facebook. Although there have been genuine reports of people in Myanmar publicly expressing support for Ukrainians, the images have been doctored. The original photos were taken during rallies held in the Ukrainian capital Kyiv before Russia's invasion of the pro-Western country.

"Many thanks to Ukraine for raising concerns for Myanmar", reads the Burmese-language caption in a post published on Facebook on February 28, 2022.

The same claim was repeated in Ukrainian and English-language captions in the post.

It has been shared more than 270 times. 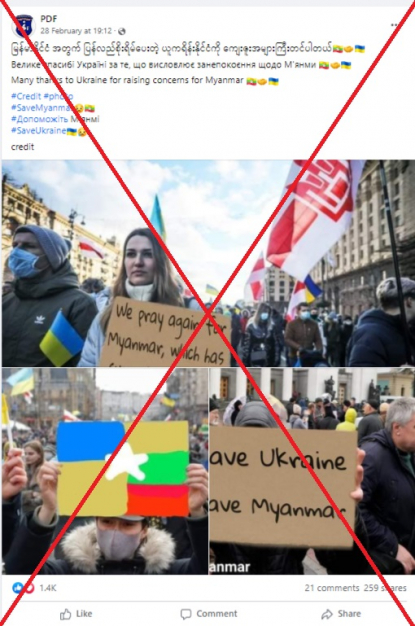 The post shared three images that appear to show people holding placards with messages of support for Myanmar.

The placard in the top photo reads: “We pray again for Myanmar, which has supported Ukraine.”

The bottom left-hand image appears to show a person holding up a placard that combines the Ukrainian and Myanmar national flags.

The bottom right-hand photo appears to feature a sign that reads: “Save Ukraine. Save Myanmar.”

There have been instances of people in coup-hit Myanmar showing their support for Ukraine since the invasion, according to Southeast Asian news site The Irrawaddy and the US-funded Radio Free Asia,

The same photos were shared here, here, and here alongside a similar claim that they show Ukrainians supporting Myanmar.

The photos, however, have been doctored.

A Google reverse image search of the first photo found an undoctored version published here on the website for the US-based international news agency UPI news.

According to the caption, the photo was taken by Oleksandr Khomenko during a rally in Kyiv on February 12, 2022.

The photo caption says the rally was held to "show unity amid US warnings of an imminent Russian invasion."

Below is a screenshot comparison between the doctored image shared on Facebook (left) and the photo as it appears on the UPI news’ website (right):

According to Reuters, the photo was taken by Valentyn Ogirenko on February 12, 2022.

The caption reads: “People take part in the Unity March, which is a procession to demonstrate Ukrainians' patriotic spirit amid growing tensions with Russia, in Kyiv, Ukraine February 12, 2022. REUTERS/Valentyn Ogirenko”

Below is a screenshot comparison of the doctored Facebook image (left) and the Reuters photo (right):

A screenshot comparison of the doctored Facebook image (left) and the Reuters photo (right).

According to the caption, the photo was taken on November 3, 2021 "during a protest against Covid-19 restrictions and vaccine mandates in Kyiv."

Below is a screenshot comparison of the doctored image on Facebook (L) and AP Images' photo (R):

A screenshot comparison of the doctored image on Facebook (L) and AP Images' photo (R).