A purported screengrab posted on Facebook in South Africa and shared hundreds of times purports to show a news item published by local media house News24 according to which Russian President Vladimir Putin told the ruling African National Congress (ANC) to stop meddling in its affairs. But this is false; News24 denied the report belonged to them while the Russian embassy in South Africa dismissed the claim of a warning from Putin.

The purported screengrab was published on Facebook on February 27, 2022, and has since been shared nearly 1,000 times. 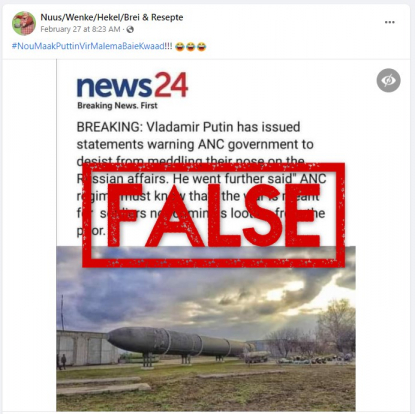 “BREAKING: Vladimir Putin has issued statements warning ANC government to desist from meddling their nose on the Russian affairs. He went further and said ‘ANC regime must know that the war is meant for soldiers not criminals looting from the poor (sic),” reads the text in the purported screengrab, which was designed to look like a genuine social media post from News24 using its logo.

None of this, however, is authentic.

AFP Fact Check did not find any article nor social media post from News24 carrying any reports of Putin issuing a warning to the ANC.

News24 confirmed to AFP Fact Check that it did not publish the alert.

“News24 did not publish such a story. It was a fake comment under News24's logo on someone’s Facebook page,” said George Claassen, News24’s public editor.

The Russian embassy in South Africa also denied serving a warning to the ANC.

Embassy spokesman Alexander Arefiev said: “Be advised that the said media posts are disinformation, the Russian president did not say such words”.

South Africa was among 35 countries that abstained from the March 2, 2022, United Nations vote censuring Russia for its invasion of Ukraine. An overwhelming majority of nations voted in favour of the non-binding resolution.

South African President Cyril Ramaphosa said that the country abstained because the resolution didn’t contain enough emphasis on dialogue as a means to resolve the crisis.

The country had initially called on Russia to withdraw its forces from Ukraine, becoming one of the first African nations to speak up on the matter. However, South African media reported that Ramaphosa was unhappy with his foreign minister's statement because he felt it contradicted the country’s policy.

South Africa and Russia are members of the five major global emerging economies referred to as the BRICS bloc. Other countries include China, Brazil, and India.