Social media posts shared after Russia invaded Ukraine claim a photo shows one of Kyiv's soldiers crying. But the picture was taken years earlier and shows a British paratrooper at a ceremony at which he received the beret of his brother, who was killed in Afghanistan.

"This pic of a Ukrainian soldier breaks my heart," says text superimposed on a photo of a weeping young man wearing a military uniform in a March 8, 2022 Facebook post. 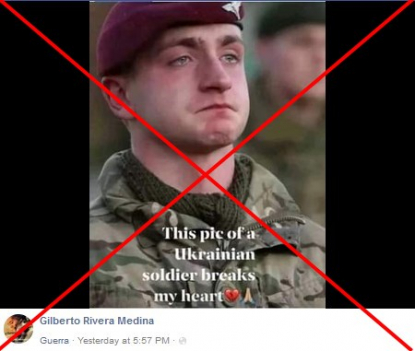 The timing of the posts -- which caption the photo in various ways and languages -- suggests that the image is from the current conflict in Ukraine, though this is not stated directly.

But a reverse image search shows that the picture appeared in a 2019 article on British tabloid The Sun's website.

The photo's caption says: "Fin Doherty, the brother of slain a Afghanistan war hero, broke down in tears after formally earning his Paratrooper beret." 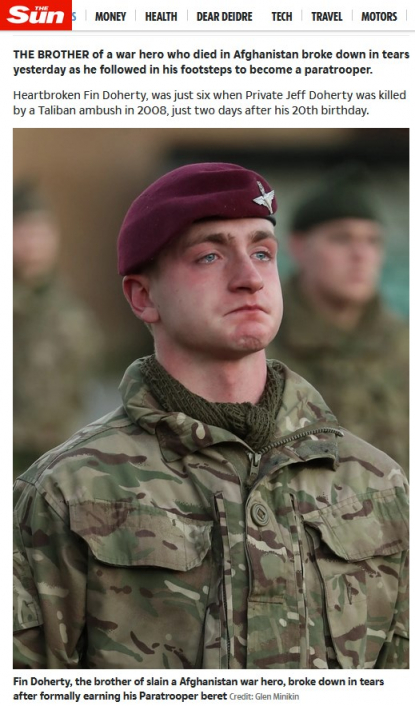 Screenshot taken on March 9, 2022 shows an image on The Sun's website

Jeff Doherty was killed in a Taliban ambush in 2008. The Sun's article says Fin vowed to follow his brother into the Parachute Regiment.

"It means everything to receive his beret," the article quotes him as saying. "I've always wanted to wear his beret so that it gets to see the things he would have done had his career not been cut short."

The UK Ministry of Defense also tweeted a similar photo, identifying the man it pictures as Fin Doherty. 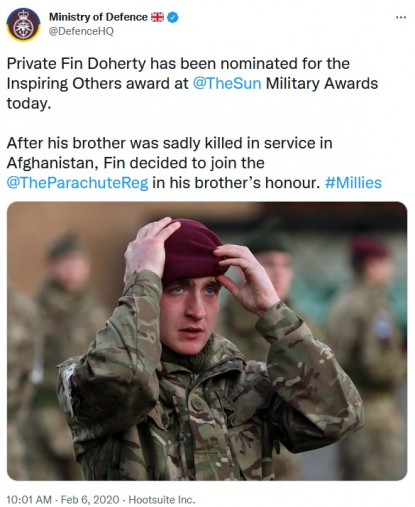 In a February 2020 interview, Doherty, wearing the maroon beret, explained that his brother was his "role model."