After Russia's invasion of neighbouring Ukraine, an image of a man kissing a woman's pregnant belly circulated in online posts that claimed it shows a Ukrainian soldier kissing his "unborn child goodbye" as he prepared to fight for his country. But the image -- which has been shared hundreds of times -- has circulated in a false context. It was originally published by the Slovakian defence ministry in a 2012 post about soldiers returning from a mission in Afghanistan.

"Battle on the Ukrainian front: Ukrainian soldier kissed unborn child goodbye," reads the Chinese-language caption alongside the image posted on Twitter on March 2, 2022. 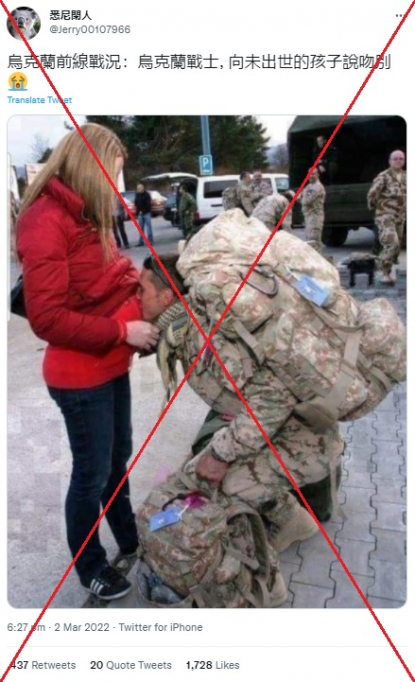 Comments on the posts suggested some social media users were misled by them.

"Pray for this father! Hope he comes home safe," one wrote.

However, a reverse search on Google found the image predates Russia's invasion of Ukraine by almost ten years.

The image was originally published here on the website of the Ministry of Defence of Slovakia on March 23, 2012.

"After successfully completing the tasks in the ISAF operation, 167 soldiers returning from Afghanistan safely landed at Poprad Airport on 21 and 22 March 2012."

Poprad is a city in Slovakia located some 300 kilometres (200 miles) east of the capital Bratislava.

"ISAF" -- an acronym for the International Security Assistance Force -- was a multi-country military mission to Afghanistan staged from 2001 to 2014.

Members of the Slovakian military joined the mission as part of their country's membership of NATO, according to this NATO report.

Below is a screenshot comparison of the image shared in the false posts (left) and the photo published by Slovakia's defence ministry (right): 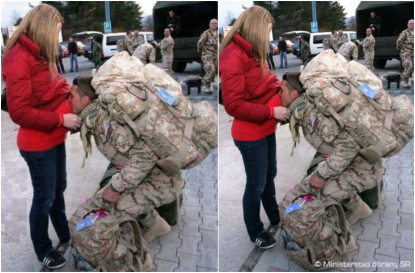 The 2012 article also features other photos of the same man and woman, as seen below: 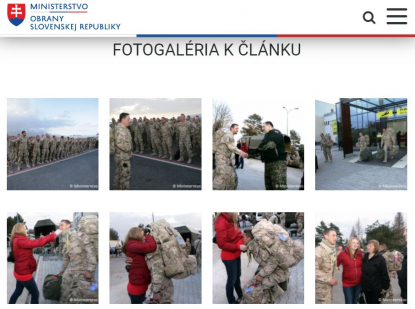 A further reverse search on TinEye here found the image has been published in multiple online posts since at least 2013.

There has been a proliferation of online misinformation following Russia's invasion of Ukraine. AFP Fact Check has debunked some of the biggest claims here.