Facebook posts claimed that British Columbia’s top health officer warned about the risks of asbestos poisoning from boards used as barriers against COVID-19 transmission during sex. This is false; health authorities in the Pacific province did include “glory holes” in online virus-prevention tips, but they did not mention asbestos. That warning was satire shared out of context, its author told AFP.

"We realize that many British Columbians have been waiting for a long time for the opportunity to get intimate and a few of those who will choose to use glory holes need to be aware that older gypsum sheet that may be sitting in the basement or backyard will often contain toxic levels of asbestos,” a Facebook post shared in late July 2020 said.

The post attributes this statement to Bonnie Henry, the top doctor in the westernmost province of British Columbia (BC), and left many Canadians in shock. 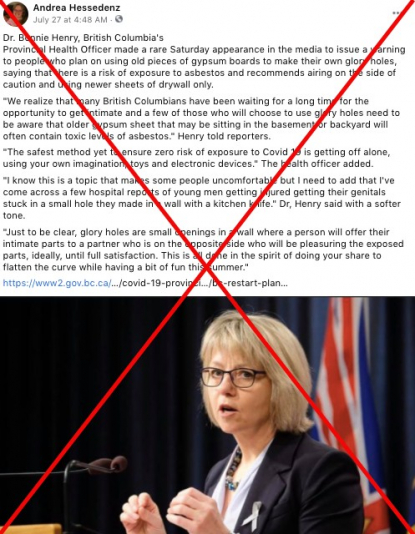 “It's good to see our tax dollars being spent on such a worthy topic. What do they advocate for next? Incest? Pedophilia?” complained one post in a Canadian politics Facebook group. 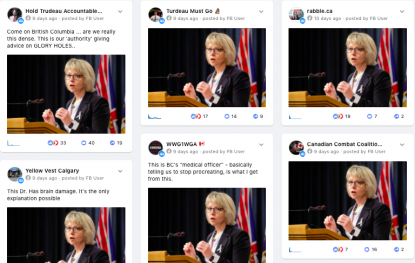 The posts refer in part to a real recommendation from the BC Center for Disease Control (BCCDC), which is overseen by Henry, the provincial health officer. The agency recommended in late July that citizens “use barriers, like walls (e.g., glory holes), that allow for sexual contact but prevent close face-to-face contact.”

Glory holes are orifices made to allow sexual interactions through a wall, traditionally with strangers.

The concept became a trend on Canadian Twitter after a journalist pointed out the tip.

The BC Centre for Disease Control is recommending using “glory holes” to practice safe sex during the pandemic — and I just want to know if this is a common thing people have in their homes. pic.twitter.com/sS7vmFuCDa

However, Henry did not mention the use of glory holes, or asbestos poisoning risks.

“We can confirm that the Facebook post is a hoax” Chris Schewchuk, a spokesman for the BC Ministry of Health, told AFP by email. “Unfortunately, our public health guidance has been the source of some satire-based posts on social media,” he added.

When asked about safe romance during the COVID-19 pandemic in a June 25 news conference Henry said, “We can’t stop it being summer and love still happens during COVID. Start online, start meeting outside, before you take the plunge.”

The claim was originally published on July 26 on Pepper Spring Exchange, a Facebook page labelled as satire with an emphasis on Canadian news.

The page moderator, who said his name was Christian Tatonetti, claimed authorship of the post in a direct message conversation with AFP, as well as for a similarly crude 2015 hoax implicating then-Canadian prime minister Stephen Harper.

“It comes naturally to me,” said Tatonetti, who told AFP he lives on the BC Gulf Island of Salt Spring.

Health authorities in other North American cities have also published guidelines for sexual encounters during the pandemic. New York City advised its residents to “Be creative with sexual positions and physical barriers, like walls,” while Toronto said that the “safest sex partner during the COVID-19 pandemic is yourself.”

“There is currently no evidence that the COVID-19 virus is transmitted through semen or vaginal fluids, but the virus has been detected in the semen of people who have or are recovering from the virus,” an article from top US hospital the Mayo Clinic found.

Earlier in July, a list of COVID-19 safety advice was also falsely attributed to Henry.