Social media posts shared around the world in April 2021 purport to show two images of Swedish climate activist Greta Thunberg after gaining weight. The images, however, have been doctored: one has been manipulated from a 2019 news photo, while the other has been altered from a screenshot of a video that was filmed in 2018.

“How dare you,” the caption reads.

This is a reference to Thunberg’s speech at the United Nations in September 2019 when she launched an attack on world leaders for allegedly failing to act on climate change. 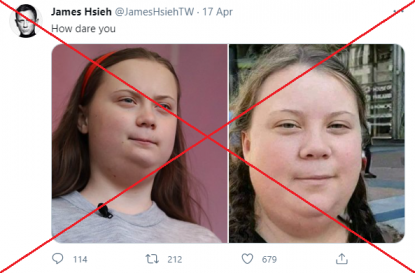 The same images have also circulated on social media around the world, including in posts shared in Chinese, Japanese, Russian, Spanish and German.

The images prompted thousands of reactions from social media users, some of whom appeared to believe they were genuine.

“How can she get that fat if her family are all vegetarians?” commented one Weibo user.

“If you’re really protecting the environment, you should lose weight for the Earth!” another wrote on Twitter.

Thunberg has become a regular target for online misinformation. AFP previously debunked false claims about her, including: that she told Chinese people to stop using chopsticks to save trees; and that she was photographed eating lunch on a train while apparently oblivious to hungry children looking in from the window.

The images of Thunberg’s apparent weight gain, however, have been manipulated.

The first image has been doctored from a 2019 news photo taken by Getty Images.

Reverse image searches on Yandex based on the first image found this original photo published on the official Getty Images site.

The altered photo circulating on social media is in fact a mirrored version of the Getty Images photograph.

In the original picture, Thunberg’s face has a visibly less swollen appearance than in the picture circulating online.

The second image of Thunberg wearing her hair in plaits has been altered from a video taken in Brussels in 2018.

The corresponding image can be seen from the video’s five-second mark: 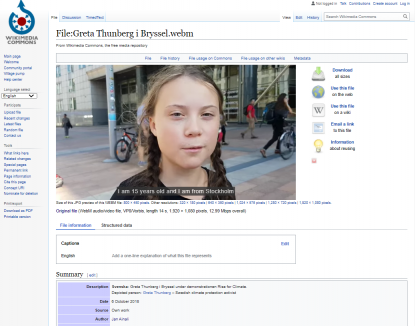 Screenshot taken on April 22, 2021, of the video on Wikimedia Commons

The corresponding photo can be seen around the five-second mark of the video, where Thunberg’s face looks slimmer:

The video's description states it shows Thunberg on a street in Brussels on October 6, 2018 during the Rise for Climate demonstration.

Ainali introduced the video in the blog post as one of his 2018 uploads on Wikimedia Commons.

He also mentions that the video, recorded by himself, was viewed a lot later after Thunberg appeared on the Norwegian-Swedish television talk show Skavlan.