Skip to main content
A crematorium staff lights a pyre of a Covid-19 coronavirus victim, who died from a fire incident that killed thirteen Covid patients at a hospital in the city of Virar, north of Mumbai. (AFP / Punit Paranjpe)

A video has been viewed tens of thousands of times on Facebook and Twitter alongside a claim it shows crowds of Indian Muslims gathered during Ramadan in the southern Indian city of Hyderabad. The posts circulated online as India endured a huge second wave of coronavirus cases that has partly been blamed on large religious gatherings. But the video has been shared in the wrong context: it actually shows Muslims mourning the death of a cleric in the north Indian state of Uttar Pradesh. 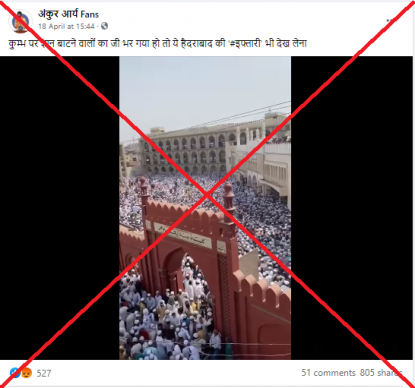 The post claims the video shows Indian Muslims gathered for Iftar -- breaking the day-long fast after sunset during the holy month of Ramadan.

The post’s Hindi-language caption translates to English as: "The people should also see this Iftar feast if they are done with spreading knowledge over Kumbh".

The video circulated online as the Indian government faced criticism for allowing the Kumbh Mela -- a Hindu religious festival -- to be held in the north Indian town of Haridwar despite the country's mounting Covid-19 cases.

The video, however, has been shared in the wrong context.

“The funeral prayer for Hazrat Maulana Abdul Momin Nadwi, ocean of knowledge and manager o Madrasa Anjuman Muainul Islam. May god bless his soul and place him high in heaven,” reads the post’s caption in Hindi.

Similar videos of the event alongside photos of Maulana Abdul Momin Nadwi, a renowned Muslim cleric, were also shared here and here on Facebook post on the same day.

According to these Facebook posts, the event was held at Madrasa Anjuman Muainul Islam, an Islamic seminary in the Sambhal town of Uttar Pradesh state.

The video corresponds with images of the seminary on Google Maps here.

Below is a comparison screenshot of the buildings seen in the Facebook video (L) and the photo found on Google Maps (R) with identical elements highlighted in red by AFP: