Video of DMX fans blasting music on the street was shot in Orlando, not New York where he died

Facebook posts claiming to show a crowd escorting the body of American rapper DMX from White Plains hospital in New York — where he passed away — while blasting his music has been viewed thousands of times online. The claim is misleading; AFP Fact Check geolocated the video in Orlando, Florida, with local police also confirming it was filmed there. There is no official evidence that DMX's body was transported to a different state after his death.

Kenyan musician Juacali, whose Facebook page has 620,000 followers shared the video with the caption: “Body ya (“of” in English) DMX leaving the White Plains Hospital woah!!! (sic)”.

The clip shows a crowd of revellers on the street jamming to DMX’s song “Ruff Ryders’ Anthem” as they follow a  black vehicle.

Born Earl Simmons, DMX died on April 9, 2021, after nearly a week on life support following a heart attack. The hardcore hip-hop star, who documented the struggles of the American street and his own inner pain in his music, passed away at the age of 50 years.

Hundreds of fans held prayer vigils outside the hospital in White Plains, a suburb north of New York City before he died.

After his death, there were news reports (here and here) that fans had gathered outside the hospital to mourn him.

However, the misleading post does not show fans escorting his body from White plains hospital in New York.

This Youtube video which is a bit longer than the video circulating on Facebook provided the first clue that the footage was not shot in New York.

Twenty-eight seconds into the clip, the words “City of Orlando” are seen atop one of the vehicles cruising among the revellers. 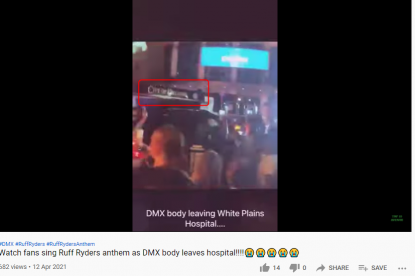 AFP Fact Check also located the word “corona” alongside two illegible words written on a building next to a junction.

A search on Google maps for the word “corona” in Orlando led to this result which looks like the exact location where the video was captured. The full name of the building is “Corona Cigar Co.”

We juxtaposed several cues (circled in red) below as proof that the video was recorded in the streets of Orlando, Florida.

The Orlando Police department confirmed that the video was taken in the state but did not have more information including the date of the event. It said it had spotted several local social media account holders sharing the same visuals as being recorded in the area.

“As far as we can tell, this video was indeed recorded in Orlando, Florida, not New York.  It appears to have been recorded around the time local clubs let out,” Orlando police told AFP Fact Check.