Photo of Queen Elizabeth II crying was taken in 2002, not at her husband’s funeral in 2021

An image of Queen Elizabeth II has been shared thousands of times on social media alongside claims that it shows the British monarch crying after the death of her husband Prince Philip in April 2021. This is false; the image was taken during a Remembrance Day service on November 7, 2002, outside Westminster Abbey in London.

A newspaper in Nigeria shared this image of the queen alongside the caption: “She is human after all. A life without her husband of 73 years. Queen Elizabeth shed tears yesterday during church service. Now, she will live without the Duke, Prince Philip, her husband.”

Another news aggregating website ran the image alongside claims that the queen “was spotted crying after the demise of Prince Philip”. A screenshot taken on April 23, 2020, showing one of the misleading posts

The queen indeed lost her husband of over 70 years, who died aged 99 on April 9, 2021. But the image making the rounds does not show her mourning the Duke of Edinburgh.

Multiple reverse image searches showed that the image was taken in 2002 and not 2021. This news article, published by The Telegraph newspaper in February 2017, uses the same portrait of the queen, crediting it to Mark Stewart who captured the shot at the Field of Remembrance on November 7, 2002. 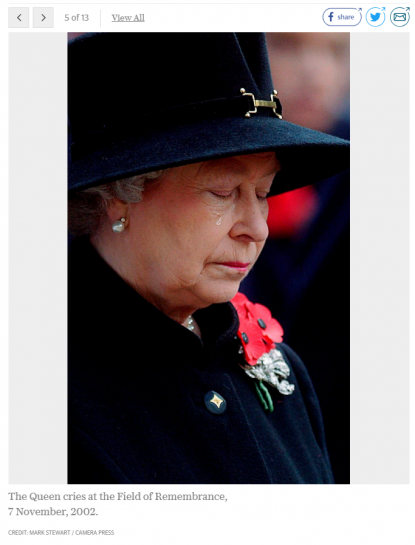 Screenshot taken on June 7, 2019 of The Telegraph newspaper website

Stewart, a photographer with Camera Press, has been photographing the Queen and The Royal Family for more than 30 years.

The picture was taken at the very first Remembrance Day the queen would observe without her mother, who had passed away On March 30, 2002, at the age of 101.

This AP video also captured the queen’s solemn appearance at the remembrance service.

Previously, the image was shared online alongside claims that it showed the queen at a ceremony for the 75th anniversary of D-Day. AFP Fact Check debunked the claim here.