Multiple Instagram, Facebook and Twitter posts have shared an aerial photo which they claim shows a protest against coronavirus lockdowns in the UK capital of London in April 2021. The claim is false: the photo shows a march in October 2018 that called for a fresh referendum on Brexit. 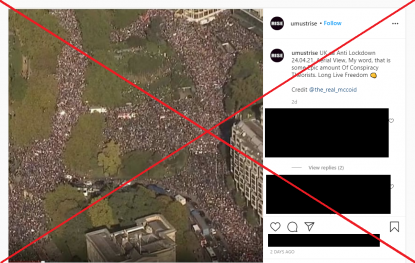 The photo circulated online two days after demonstrators gathered in London to protest against the UK’s Covid-19 restrictions.

A reverse search on Yandex followed by keyword searches on Google found the photo shows a march calling for a fresh referendum on Brexit in October 2018.

The photo is almost identical to the image published here by UK broadcaster ITV on October 20, 2018.

The ITV report reads in part: “Organisers claim 670,000 people have attended a march in central London calling for a fresh referendum on the outcome of the Brexit negotiations.

“The People's Vote march set off from Park Lane before heading to Parliament Square for a rally.”

Below is a screenshot comparison of the photo in the misleading posts (L) and the image published by ITV (R):

The photo also corresponds to videos of the same march calling for a fresh Brexit vote published here by ITV and here by The Guardian.

AFP has previously debunked misleading posts that have similarly misrepresented an anti-Brexit demonstration in March 2019 as an anti-lockdown protest.