Skip to main content
Shanghai grandmother Chen Jifang, 68, works out at a gym on September 17, 2020 (Photo by STR)

Social media posts in South Korea claim the United Nations (UN) has reclassified 18 to 65-year-olds as “youth”. The claim is false: representatives from various UN agencies said there was no such system, and UN publications define “youth” as individuals aged between 15 and 24.

The image was shared on April 4, 2021 in this post on Daum Cafe, a popular social media platform in South Korea.

“The UN has announced a new five-tier standard definition system to categorize age groups, based on measurements of the health quality and average life expectancy of the global population,” the Korean-language text reads. 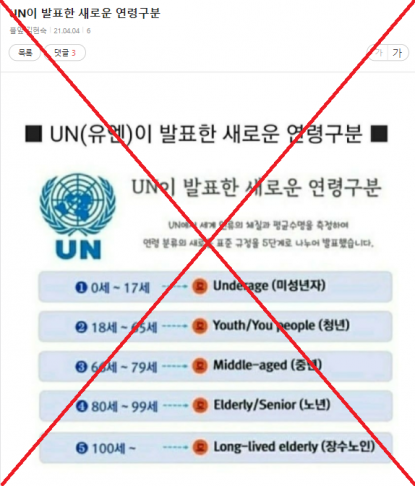 However, representatives from various UN agencies said the claim was baseless.

Contacted by AFP, Wai Kit Si-Tou, a spokesman for the UN Economic and Social Commission for Asia and the Pacific, said he was not aware of the age classification system described in social media posts.

Roy Wadia, a communications adviser for the UN Population Fund, also told AFP he was also unaware of any such system.

A representative for the World Health Organization, the UN's health agency, said the social media posts were baseless.

“This is misinformation. We continue to use 60 years and older as being older people,” the spokesperson said.

Multiple keyword searches on official websites of UN agencies did not find any report indicating people between the ages 18 to 65 had been reclassified as “youth”.

The UN's Department of Economic and Social Affairs defines “youth” as persons between the ages of 15 and 24 years.

“The United Nations, for statistical purposes, defines ‘youth’, as those persons between the ages of 15 and 24 years,” its website says.

Meanwhile, the UN's High Commissioner for Refugees defines over-60's as an “older person”.