Multiple Facebook posts have shared an aerial image of containers spelling out THANK YOU alongside a claim that trafficked children were rescued from the Ever Given, a container vessel that got stuck in Egypt’s Suez Canal for almost one week in March 2021. The claim is false: the image was taken in September 2020 -- months before the vessel blocked the canal. AFP has previously debunked claims that a US Navy SEALs mission had found trafficked children and dead bodies on board the Ever Given.

The post’s Korean-language caption says: “Ever Given Container Ship. This was done by the military with a smile and tears after they rescued children.”

The post also shares a screenshot of a Facebook post which includes the image of a “THANK YOU” message spelled out with cargo containers at what appears to be a port.

AFP found this Facebook post, which indicates the image was taken at the Ein EL Sokhna Port in Egypt.

The Taiwan-owned MV Ever Given became stuck in the Suez Canal on March 24, 2021, bringing marine traffic to a shuddering halt along one of the world's busiest trade routes for almost one week before it was refloated, AFP has reported. 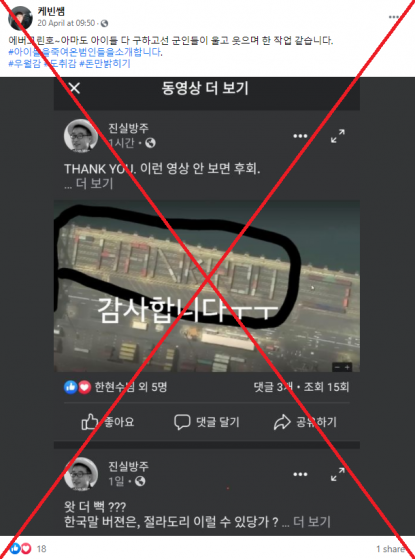 Google satellite images of the Ein EL Sokhna Port do show “THANK YOU” spelled out with containers at the port.

The image, however, was taken on September 10, 2020, according to Google Earth Pro database, months before the Evergreen Vessel blocked the canal.

Screenshot of the Google Earth Pro, taken on April 28, 2021. Imagery date circled in red by AFP.

AFP has previously debunked claims that the Ever Given was being used for human trafficking.

AFP has also debunked claims that have circulated in Korean that a US Navy SEALs mission had found trafficked children and dead bodies on board the Ever Given.

The MV Ever Given’s owner, the Taiwanese Evergreen Marine Corporation, said in an emailed statement they had not been involved in any illegal activity.

Polaris, a US-based anti-trafficking organization, the International Maritime Organization (IMO) and the US Immigration and Customs Enforcement, whose Homeland Security Investigations branch probes transnational crimes, all told AFP that they had no information that would support claims of trafficking on the Ever Given.