This image shows the memorial service for Lol Mahamat Choua, Chad’s fourth president who died in 2019

An image showing men praying in front of a coffin has been shared hundreds of times alongside a claim that it was taken at the funeral of Chad’s former president Idriss Deby Itno, who died on April 19, 2021. But the claim is false; the image shows the memorial service of another former Chadian leader, Lol Mahamat Choua, who died in 2019.

“FUNERAL PRAYER OF LATE PRESIDENT IDRISS DEBY ITNO. SAD DAY FOR TCHAD AND WEST AFRICA (sic)” the post’s caption claims, then proceeds to lavish praise on Deby for being an African “hero”.

The post was published on Facebook on April 20, 2021, and has been shared more than 100 times with a picture of people gathered outside facing a flag-draped coffin. 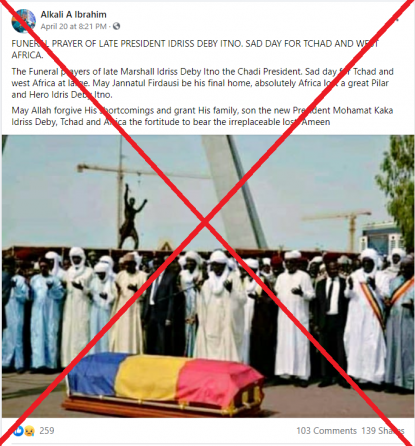 A similar image with a line of text in French that claims it depicts “the remains” of Deby was also shared on Facebook here.

Deby, who had ruled over Chad for 30 years, died from battle wounds suffered on the frontline during an offensive against rebels on April 19, 2021, the army said in a statement read out on state television.

His funeral took place on April 25, 2021, and was attended by foreign leaders, including French President Emmanuel Macron. 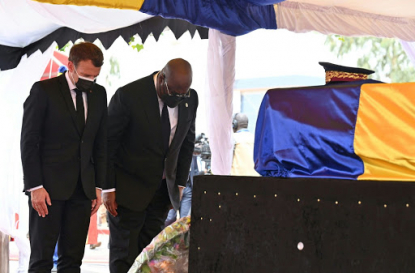 The image shared on Facebook, however, is not recent and does not show Deby's funeral.

Using Tineye, AFP Fact Check ran a reverse image search and traced the image back to a YouTube video published on September 17, 2019. The title in Arabic translates to English as “Mourning ceremony - memorial service for the death of former Chadian President Lol Mahamat Choua”.

Three minutes into the video report of his funeral, a row of men can be seen standing in front of a coffin draped in the national flag of Chad. Although filmed from a different angle, the same people are visible in the footage and the image shared on Facebook. 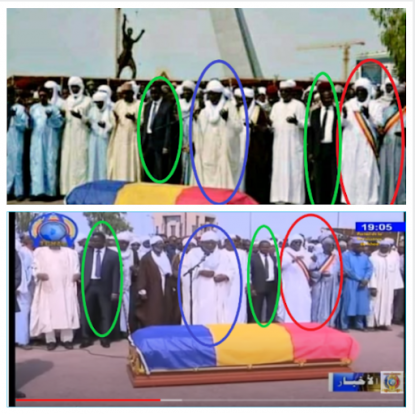 For instance, two men are evidently wearing a sash in the colours of the Chadian flag (circled red) while another two are dressed in dark suits and ties (circled green). An imam reciting the prayer with a microphone stand in front of him (circled blue) is also visible in both the image and video.

Furthermore, the false Facebook post was published on April 20, 2021, three days before Deby’s funeral service was held in the capital N’Djamena.