A photo has been shared on Facebook, Twitter and Instagram alongside a claim that it shows a 1,500-bed hospital set up to cope with surging Covid-19 cases in the northern Indian city of Lucknow. The claim is false: the image is actually from a school in Delhi that was converted into a makeshift Covid-19 hospital in April 2021.

The post’s Hindi caption translates to English as: “1,500 bed hospital has been prepared in Lucknow; the country will win, Corona will lose.”

Lucknow is the capital of the northern Indian state of Uttar Pradesh. 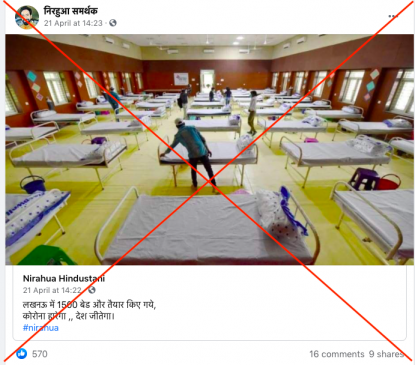 The post circulated online amid a surge in Covid-19 infections in India that has seen the 1.3-billion-people nation's healthcare system stretched to the limit, with desperate warnings of a shortage of oxygen, medicines and hospital beds.

The photo was also shared here and here on Facebook; here on Twitter alongside an identical claim.

“Delhi govt school at Rouse Avenue is being converted into Covid Hospital with 125 beds with the help of 'Doctors for You'. Hon CM @ArvindKejriwal reviewed the progress at site,” reads the tweet.

Arvind Kejriwal is the chief minister of Delhi.

Delhi govt school at Rouse Avenue is being converted into Covid Hospital with 125 beds with the help of 'Doctors for You'.

Below is a screenshot comparison of the photo circulating in misleading posts (L) and the photo of the Delhi hospital in Sisodia's tweet (R).

Delhi government converted a school into a makeshift Covid-19 hospital with 125 beds, as reported in April 2021 by several news websites including India Today, Indian Express and Times Now.

AFP matched visual clues in the photo from misleading posts (L) with those in the NDTV video (R).

A banner that reads “Doctors for You” in NDTV video and misleading post can also be seen in Sisodia’s Twitter photos shared from the makeshift hospital in Delhi, as shown in this cropped screenshot: 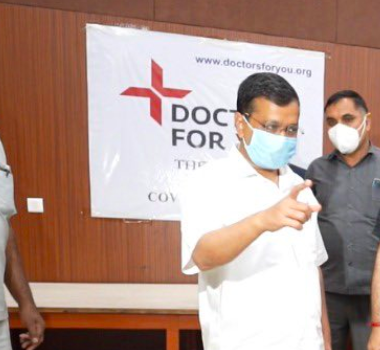