This image shows an anti-Brexit demonstration in London in 2019

An aerial image of a large protest has been shared on Facebook and Instagram alongside a claim that it shows an anti-lockdown demonstration in the UK capital of London in March 2021. The claim is false; the photo in fact shows an anti-Brexit protest in March 2019.

The photo was published on March 21, 2021, on Facebook here, where it has been shared more than 660 times since.

The post’s caption reads: “Best I’ve found so far.
London... we showed the world how it is done.” 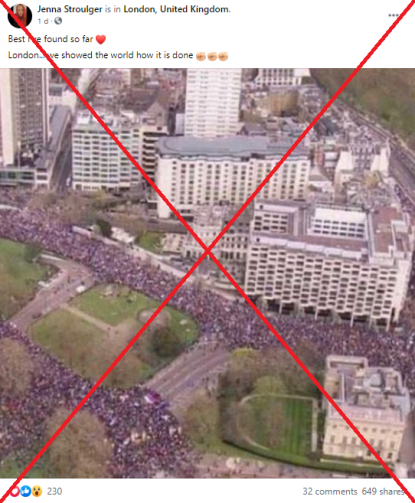 The post circulated after thousands of people protested against ongoing Covid-19 restrictions in London on March 20, 2021, as AFP reported here.

The Facebook user posted other anti-lockdown protest news throughout the day. Other Facebook users also appeared to believe the image was associated with the anti-lockdown protest, posting comments such as: “Well done all you folks in London it was fantastic to see everyone all united and muzzleless and real faces for a change instead of zombies.”

The photo was also published alongside a similar claim on Facebook here, here, and here; and on Instagram here.

A Google reverse image search found that the photo was published in a BBC report here on March 23, 2019. The article is headlined “Brexit march: Million joined Brexit protest, organisers say”.

“Aerial pictures taken from a helicopter showed the scale of the crowds,” the image’s caption reads.

Below is a screenshot comparison between the photo shared in the misleading post (L) and the image published by the BBC in 2019 (R):

A similar angle to the image can also be viewed at the 21-second mark in this BBC aerial video, which shows the extent of the protest from London’s Park Lane to Parliament Square.