Skip to main content
Indian National Congress Party leader Rahul Gandhi (L) speaks during a rally to protest against the recent passing of agriculture reform bills in the Parliament, in Moga on October 4, 2020. (NARINDER NANU / AFP)

A clip of a man appearing to tell leading Indian opposition politician Rahul Gandhi that unemployment has not increased under the ruling Bharatiya Janata Party (BJP) government has been shared in multiple Facebook and Twitter. The posts, however, are misleading; the video has been deceptively edited. The full footage of the exchange shows that the man, who was communicating through a translator, misunderstood the question and later clarified that “unemployment has risen” under the BJP. 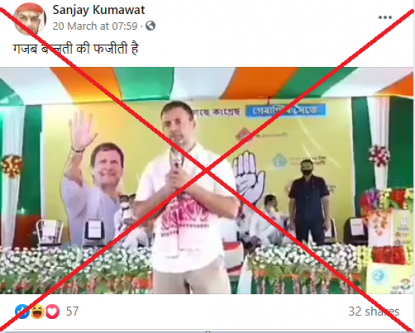 The video shows Rahul Gandhi, a leading figure in the opposition Indian National Congress (INC) party, at an event in India’s northeastern state of Assam on March 19, 2021.

In the clip, Gandhi asks a question in Hindi that translates as: “Ask one thing, does he feel that unemployment has increased during the BJP’s tenure?”

A male voice answers in Hindi: “No, not increased”.

The Facebook post’s Hindi caption translates as: “What an insult, buddy”.

The posts, however, are misleading as the video has been edited.

A reverse image search with video thumbnails found an hour-long livestream of the same event on Gandhi’s verified YouTube channel here on March 19, 2021.

The clip seen in the misleading posts, which purports to show a man stating unemployment has “not increased”, can be seen from 20:13 to 20:25 in the full YouTube video.

The full video shows that after the edited clip ends, the respondent in the crowd, who is speaking Assamese, updates his answer about unemployment when the question is clarified by a translator.

“Unemployment has increased,” he states.

Gandhi then follows up by asking in Hindi: “What do you think, why has unemployment increased during the BJP’s tenure?”

After the question is translated, the man responds in Assamese: “Providing employment to the youth and setting up new industries are not in the priority of the BJP government. And the main question is how the youth and country will go ahead if there is no employment.”