This video shows monkeys sliding down electricity cables in India

A video has been viewed hundreds of thousands of times on Facebook and Twitter alongside a claim that it shows monkeys sliding on electricity cables outside a hospital in Thailand’s Lopburi province. The claim is false: the video shows monkeys near an apartment building in the Indian city of Ahmedabad.

The post’s Thai-language caption reads: “Building of the King Narai Hospital in Lopburi, a new adventurous place! (Thank you, the clip owner).”

Lopburi is a province in central Thailand where monkeys are frequently seen. 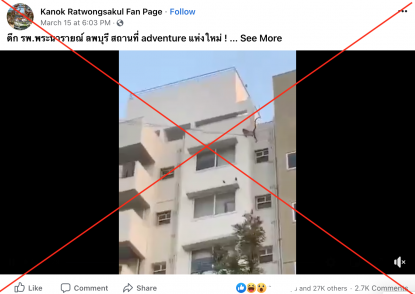 A reverse image search with video keyframes followed by a keyword search on Google found that the video was published here by Russian state media outlet Sputnik on March 9, 2021.

The article, headlined “Daredevil Monkey Uses Electric Wire to Descend From High-Rise Roof”, claims the footage was taken in India. 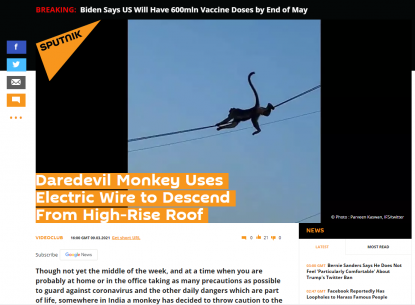 Screenshot of the article by Sputnik

Below is the screenshot of the misleading video (L) and video tweeted by Ashara (R) :

Contacted by AFP, Ashara said he filmed the clip in the city of Ahmedabad in India and that the apartment building shown in the footage is Parthsarthi Avenue.

Ashara is based in Ahmedabad according to his Twitter profile and has previously taken a video from the city of a monkey mother who saved her baby on cable wires, as reported here on May 16, 2020 by Latestly, an India-based news website.

A search of Parthsarthi Avenue on Google Earth also shows satellite image of a building in yellow and white which tallies with the apartment building seen in the Twitter video.

AFP conducted a search online and found no earlier versions of the video than the one sent by Ashara on March 9, 2021, at 3:09 PM.