A picture has been shared thousands of times on Facebook and Twitter in posts claiming it shows Nnamdi Kanu, leader of the separatist group the Indigenous People of Biafra (IPOB), addressing the European Parliament. This is false; AFP found that the picture is an edited version of a photo that shows former Georgian president Mikheil Saakashvili addressing the parliament in 2006.

“Breaking news.. IPOB Leader Nnamdi kanu and Deputy Uche Mefor shakes European Union Parliament in Brussels,” reads the caption on one of the Facebook posts, which has been shared nearly 1,000 times. We’ve archived that post here, along with some others making the same claim here and here.

A screenshot taken on September 20, 2019, showing one of the Facebook posts that included the doctored picture

A YouTube video also referring to the visit, seen more than 39,000 times, claimed that the EU parliament had agreed to all the demands of the pro-Biafran activist.

“The European Union Parliament has approved all the demands from the leader of the Indigenous People of Biafra (IPOB), Mazi Nnamdi Kanu, and the body has assured him of full support for the actualisation of Biafra nation,” the video claimed.

A unilateral declaration of an independent republic of Biafra for the Igbo people who dominate southeast Nigeria was made in 1967, sparking a brutal 30-month civil war that left more than one million people dead.

More than 50 years after the civil war started, Kanu, a British-Nigerian political activist and former London estate agent, seized on latent secessionist sentiment in the southeast to found IPOB and resurrect calls for an Igbo nation. He was arrested in 2015 but disappeared while on bail in 2017, only to re-emerge in Jerusalem, then in Britain.

Kanu’s call for an independent Biafran nation has thus taken on international dimensions, with his group petitioning the United Nations over alleged human rights abuses and his followers recently attacking a Nigerian senator during a visit to Germany.

Kanu did visit the European Parliament, but he didn’t address the chamber

On September 11, Kanu tweeted a picture of himself meeting a British member of the European Parliament, Seb Dance, suggesting that he had indeed visited Brussels where the European Union has its headquarters.

A big thank you to MEP Sebb Dance, his colleagues and hardcore Biafrans that made our visit to the European Parliament on September 10, 2019, memorable.
IPOB family worldwide are thankful. Quest to restore Biafra is unstoppable. Next stop, UN. pic.twitter.com/63q9qVoDsV

Dance’s office told us that the British MEP had indeed met with IPOB members at the parliament on September 10, but he stressed that his stance on the Biafra issue was neutral -- contrary to social media posts claiming that the EU had expressed support for the Biafran cause.

“Seb hosted a neutral, informational event regarding the issue. Representatives from the Indigenous People of Biafra (IPOB), the Nigerian embassy and various other Members of the European Parliament attended,” Dance’s assistant Alex White told us in an email.

Dance himself said after the event: “I made it clear that I am not here to take a position, but to listen to different groups' concerns.”

Delphine Colard, a parliament press officer, stressed that Kanu was not invited by the parliament as a whole.

“This was not an event of the European Parliament but a meeting organized by a deputy with a delegation of the Biafra movement and members of the Nigerian Embassy,” she said in an email.

As for the picture supposedly showing Kanu addressing the parliament, it’s a fake.

We ran a Google reverse image search, which revealed to us that the original image had been on the internet as early as 2008. This EU Observer article has the same picture, before it was manipulated. Comparing it to the doctored version, you can see that apart from the man at the podium, everything else is identical, such as the red and white flags in the foreground. 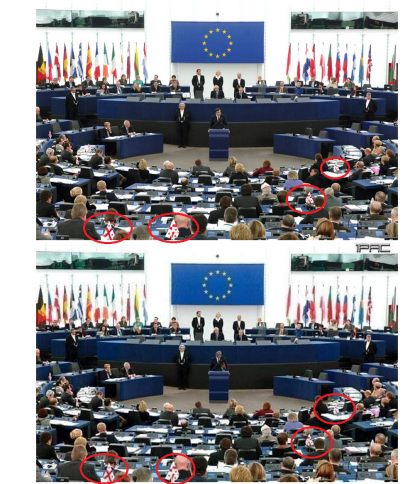 We analysed the picture using media verification tool inVID, and found that the picture was originally taken in 2006 -- see the metadata below. 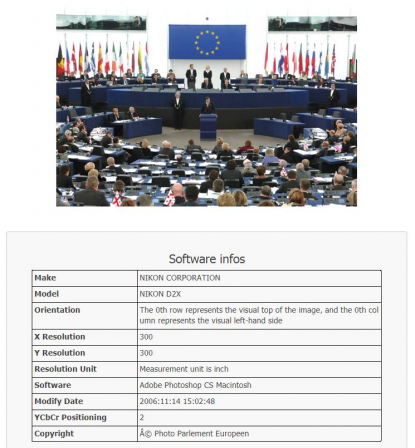 A screenshot taken on September 18, 2019, showing the metadata of the actual picture

The person speaking in the original picture is the then president of Georgia, Mikheil Saakashvili, who was in office from 2004 until 2013.

The European Parliament has two chambers, one in Brussels and the other in the French city of Strasbourg. This photo shows Saakashvili addressing the Strasbourg parliament on November 14, 2006 -- confirming the date revealed by the metadata.

Pro-Biafra activists have repeatedly shared false social media posts claiming that foreign governments have endorsed the secession of a Biafran nation from Nigeria.

We have previously debunked a false claim that French President Emmanuel Macron endorsed such a secession here, and that US President Donald Trump raised the issue at the United Nations -- read our fact-check here.