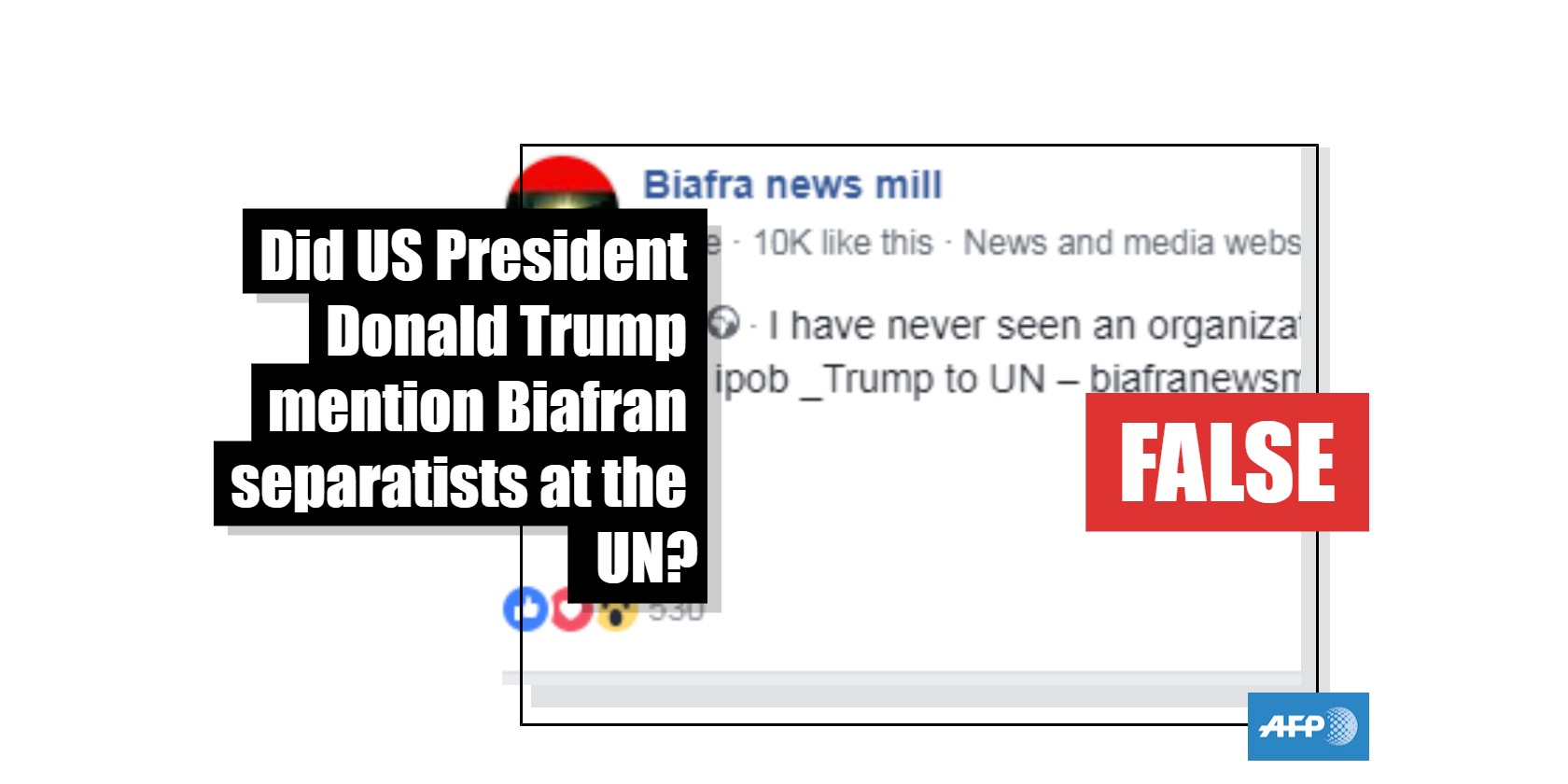 No, US President Donald Trump did not comment on Biafran separatists at the UN

Numerous articles widely shared on Facebook have claimed that US President Donald Trump mentioned a pro-Biafran secessionist group at the United Nations and described them as non-violent. The claim is false. There is no evidence that Trump has ever mentioned the Indigenous People of Biafra (IPOB) or Biafra at the UN.

An article published on December 2, 2018 by the website Masterreporters.com claimed that US President Trump disagreed with his Nigerian counterpart Muhammadu Buhari, at the UN in November, about whether IPOB was a violent group.

The article claimed that Trump said, “They (IPOB members) are not violent people.”

There is no record of Trump making any such statement. There were no results about Biafra, IPOB or Nigeria in a search on the White House website, which documents the president’s remarks.

The article also claimed that Buhari criticised IPOB at the UN. This claim is also false. Buhari attended the UN General Assembly in September. A transcript of his speech released by the presidency confirms he made no mention of IPOB or Biafra during the speech.

In December a Facebook post from the "Biafra news mill" Facebook Page, also claimed that Trump had commented on Biafra. It quoted him as saying “I have never seen an organization that is as peaceful as ipob”.

A screenshot taken on January 11, 2019 of a Facebook post carrying quotes allegedly made by US President Donald Trump

The post has been shared more than 2,500 times. The post includes an article from Biafranewsmill.com which has since been removed.

There is no evidence Trump made those comments.

The Facebook page for Radio Biafra, a radio station at the heart of pro-Biafra activism also made the claim.

A screenshot taken on January 11, 2019 of a Facebook post by Radio Biafra carrying quotes allegedly made by President Donald Trump

Similar posts and articles carrying the claims, such as the article by Masterreporters.com have stated that Trump spoke at the UN in November. There is no record of him doing so. He last spoke at the UN General Assembly in September.

The Nigerian military designated IPOB as a terrorist group in September 2017.

The group has organised large protests in southeast Nigeria since 2015, calling for the release of its leader, Nnamdi Kanu, and the creation of a separate state of Biafra for the Igbo people who dominate the region.

The protests have since waned after a series of military operations that have seen several IPOB activists arrested.

Social media posts and articles claiming that political figures from the United States and Israel have offered support to Biafran secession are widely shared amongst pro-Biafran groups critical of Buhari.