No, the boy in this video does not tell Indonesian leader Joko Widodo that he wants a new president

A video clip that has been viewed tens of thousands of times on Facebook purportedly shows a child telling Indonesian leader Joko Widodo that he wants a new president. The clip has been manipulated from one in which the boy says he dreams of becoming a YouTube content creator and makes no mention of the presidency.

The 18-second video can be found in multiple Facebook posts, such as these December 31, 2018 entries here and here with 48,000 shares combined.  AFP has provided archived versions of those links, from which the originals with the video can be found. 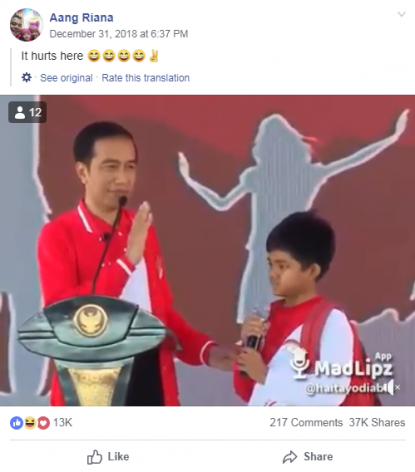 AFP found the clip also appeared in this May 1, 2018, post on the Facebook page “2019GantiPresiden” (Change The President in 2019). This page supports Prabowo Subianto, Widodo’s sole rival in Indonesia’s April 2019 presidential election. The video been viewed 24,000 times here.

In the clip, Widodo -- popularly known as Jokowi -- asks the boy about his future goals.

At 0:13, the boy appears to answer: “I want to have a new president”. Widodo looks delighted by the response.

AFP located an original version of the clip by doing reverse image searches of snapshots of the video using digital verification tool InVid.

The original version can be seen in the YouTube video below dated July 23, 2017. It has a headline that wen translated to English says: “Funny! This elementary school student tells Jokowi that he wants to become a YouTuber + Jokowi performs a magic trick”.

As the post’s title suggests, the boy says in Bahasa: “I want to become a YouTuber” at 0:07 in the genuine clip, instead of: “I want to have a new president” heard in the misleading video.

CNN Indonesia also reported on the event and publishing a video on July 23, 2017 in which the boy is seen declaring his YouTube ambitions.

It has a headline that when translated to English says: “Asked about his dream by President Jokowi, this boy says he wants to become a Youtuber -- National Children’s Day celebration”.

Below is that video:

The manipulated video also has a logo on the bottom right hand corner for Madlipz, offering a strong clue as to how it was altered. The app is an app that allows people to make instant voiceover and subtitle parodies.