No, the Exim (Export-Import) Bank of China did not tweet that South Africa’s power utility Eskom has a loan with them

A widely shared social media post claims that debt-crippled Eskom was given a 33.4 billion rand ($2,41 billion) loan from Exim Bank China and if it defaulted on payment, the bank would take control of the utility. The post is published from a fake Twitter account and an official statement from Eskom has rejected it as false.

The post which appeared on Twitter reads: “The Bank wishes to clarify to South Africa that Eskom Facility plant was granted R33.4 billion with a 5 year grace period, the loan repayments will start on June 2019 in 20 installments over 10 years...” 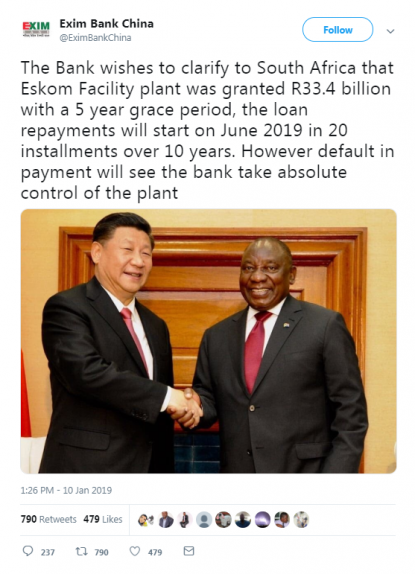 The Twitter account is fake, using a logo that is not associated with the Exim Bank of China. A Google reverse image search of the logo looks like it may have been taken from the Exim Bank of Bangladesh.

a composite of both logos, screenshot from official Exim websites on January, 11 2019

The account biography in Chinese reads: “These idiots think this is the real account of the Export-Import Bank of China”.

Eskom commented on the misleading tweet, calling it a parody account and cautioning followers to "beware of fake news."

Eskom, the state-owned monopoly, has become a major challenge for the government, racking up $30 billion in debt.

South African President Cyril Ramaphosa announced in July 2018 that China would invest $14 billion in the country after he held talks with President Xi Jinping on the eve of a multilateral summit.

Vast Chinese loans to cash-strapped African countries are controversial, with critics saying national sovereignty is undermined and that Beijing has become too influential on the continent.

China is the single largest bilateral funder of infrastructure in Africa, exceeding the combined total of the African Development Bank (ADB), the European Union, International Finance Corporation, the World Bank and the Group of Eight (G8) countries.